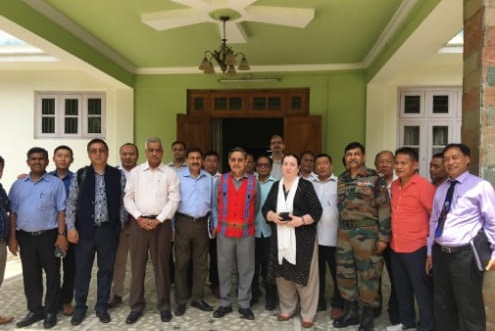 Representatives of government of India and NSCN (IM) during a meeting of Ceasefire Ground Rules Review Committee held at Chumukedima in Nagaland on June 8, 2018. File Photo: Northeast Now

The NSCN (IM) asserted that it had never, during negotiations with the Government of India, softened its stand on the issues of Naga history, identity, rights, including integration of all Naga areas, let alone accepting the Indian constitution.

Maintaining that the relationship between the Government of India and the Nagas shall be based on the agreement arrived at, the outfit made it clear that the agreement “should not be distorted by anyone for personal benefits.”

Reacting to the news report in a section of the national dailies with regard to the report submitted to the Parliamentary Standing Committee on Home Affairs on the Framework Agreement by Centre’s interlocutor R N Ravi, the NSCN (IM) in a release on Saturday night reiterated its stand to put matters in perspective and to defuse the confusion in the minds of the people.

In his report, Ravi said the NSCN (IM) has agreed to drop its demand for merging Naga-dominated areas in Assam, Arunachal Pradesh and Manipur with Nagaland. The government on its part has expressed its willingness for “some special arrangement” for the Nagas in the three states.

The NSCN (IM) maintained that the recognition of Nagas’ unique history and situation and Framework Agreement in essence implied the important steps taken towards solution through mutual respect by both the entities.

When the negotiating parties were fully committed to working out a solution that is acceptable to both, the NSCN (IM) said it was mandatory that the parties must exercise integrity and restrain any agencies trying to derail the political negotiation.

It said that both NSCN and the Government of India have taken sufficient steps including the Framework Agreement to conclude the negotiation that is respectable to both. “NSCN will not betray the steps that have already been taken. Our position is clear to the end. We are serious, and we are careful, as we know that the righteous can do nothing if the foundation is destroyed,” it