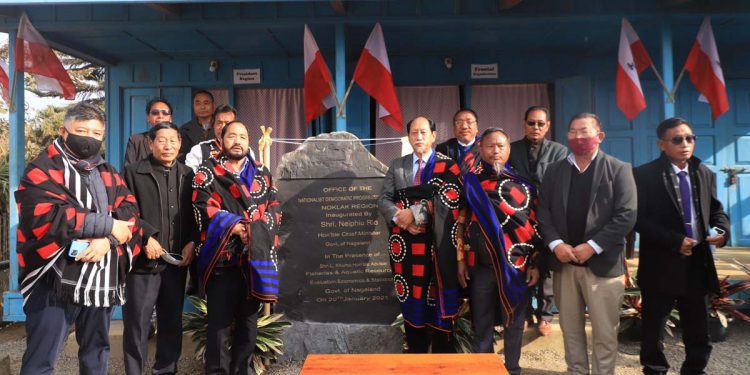 Nagaland chief minister Neiphiu Rio inaugurated Noklak as the 12th district of the State at Noklak public ground on Wednesday.

Rio called the district ‘Frontier district’, as it is located on the international border with Myanmar.

On the occasion, Vice President Venkaiah Naidu released a video on Noklak district’s profile and extended his best wishes to the new district.

Speaking at the inaugural ceremony of the district-cum-Khaozaosie-Hok-Ah festival as the special guest, Rio hoped that the district would set a good example and cooperate with the government for all round development.

Conveying best wishes to the people of the district, he called upon them to be self-sufficient and have a competitive spirit.

He exhorted the younger generation of the district to start modern farming.

Rio greeted the Khiamniungan community on the occasion of Khaozaosie-Hok-Ah festival and hoped that it would usher in a prosperous year.

On COVID19 vaccine, he said preference will be given to health care workers, frontal workers and elderly people who are above 50 years of age.

Nagaland deputy chief minister Y. Patton, who was also present on the occasion, urged the people of the district to be peace-loving and work together with the neighboring districts.

He said Noklak district is located at the far end of the State and is the gateway to the east.

“If the people of the district are united, Noklak will be a more advanced district in Nagaland,” he said.

He advised the people to avoid land issues when it comes to the development of the district.