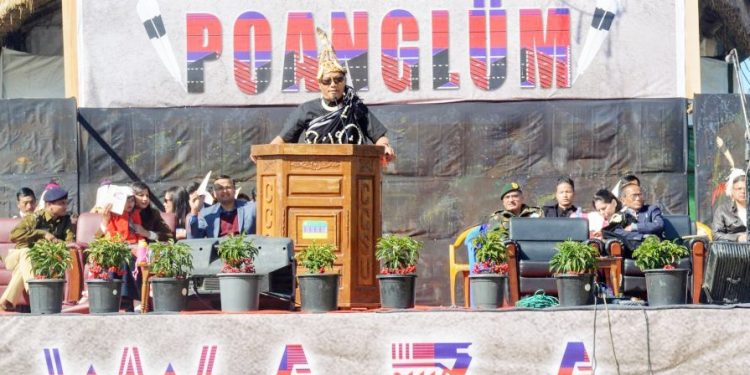 The three-day Poanglüm Mini Hornbill, which is also the premier festival of Chang community of Nagaland, got underway on Monday at Loyem Memorial Ground, Tuensang town under the theme ‘Waza’.

On the first day of the festival, Lima Onen Chang, OSD to chief minister of Nagaland was the fest patron.

The fest patron brought greetings on behalf of CM Chang, minister of forest, environment, climate change and law & justice who was supposes to be the fest patron ‘but could not make it due to some important official works’.

Talking about the history of the festival which is celebrated annually, he lamented on ‘how dependent we have become on the assistance of the government’.

He reiterated that the forefathers in the past did not rely on anything but celebrated with pomp and gaiety along with the neighbouring villages and tribes.

The fest patron stated that there are more than 5000 Chang households and approximately 30,000 Chang populations in Tuensang town with more 1500 shop owners where around 26 per cent local entrepreneurs.

“Almost all the products are being imported from other parts of the country, which is something to think about,” he added.

Further, he challenged the aspirants of the competitive exams, local entrepreneurs, leaders and Church workers to imbibe the spirit of hard work and honesty and dedication.

A drama on the significance of the Poanglüm festival was enacted by the Ngangpong Sochumers (hostellers).

A special number was presented by Chang Students’ Union Tuensang Town (CSUTT) followed by a walk to Khongdang (stalls).