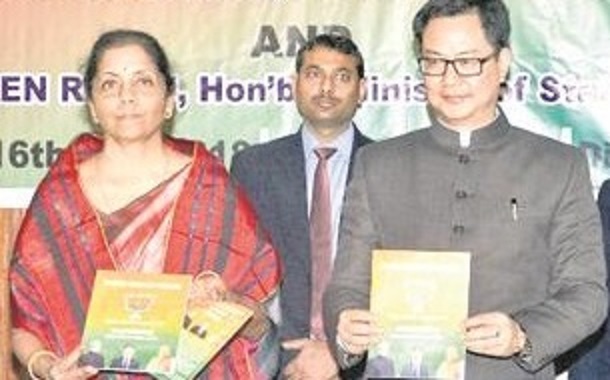 Union Defence Minister, Nirmala Sitharaman on Friday said investments should come to Nagaland and everyone should get good jobs.

Sitharaman was in Kohima to release the Bharatiya Janata Party’s (BJP) poll manifesto for the ensuing Assembly elections.

“Youngsters of Nagaland can be found all over India and the world doing good jobs. These opportunities are needed here too. The people have good mental aptitude and are good with any work they do,” she said.

The Defence Minister also stressed on the fact that this election was very crucial for Nagaland as it required political stability and development.

Coming down heavily on the Congress, Sitharaman alleged that Congress had discriminated people based on their work, caste and religion for the sake of votes. She clarified that BJP was not involved in politics of this sort.

She stressed on better connectivity in Nagaland to get access to better technology and a market for locally-produced handicrafts.

She further said, this could be achieved for all the districts in the State through Central schemes like ‘Udan’.

Union Minister of State for Home Affairs, Kiren Rijiju who is the party in-charge for the Nagaland Assembly polls was also present in the meeting.

In his address, Rijiju said several top leaders of the party, including Prime Prime Minister Narendra Modi and national president Amit Shah, will be coming to the State next week to boost the party campaign in the State.

While Modi is scheduled to address a public rally at Tuensang on February 20, Amit Shah will arrive in the State on February 23.

Rijiju alleged that the problems of Nagaland in particular and issues related to the entire north-eastern region were never addressed in the right perspective by the previous governments at the Centre.

He further said, it is only after the BJP-led government under the leadership of Prime Minister Narendra Modi that the North-east is getting importance in New Delhi.

Rijiju claimed that only the present BJP government, formed in 2014, gave the right momentum to the decades-old Naga problem.

Speaking about the party manifesto for the Assembly polls, Rijiju further said, “The manifesto has been drafted carefully and with deep thought to ensure that all needs of the people of Nagaland are well taken care of.”