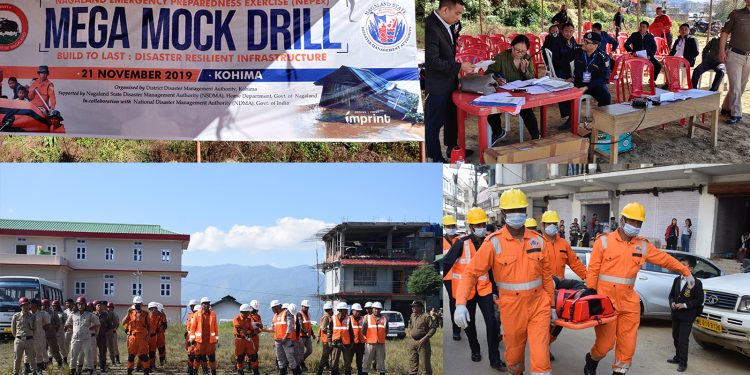 A mock drill on disaster management titled “Build to Last: Disaster Resilient Infrastructure” was carried out in Kohima on Thursday.

The drill was conducted in three stages which included incident response system and coordination conference, table-top exercise and mock exercises.

During the exercise, 200 volunteers acted as casualties and injured victims.

He thanked all the departments, police personnel and the stakeholders involved for the successful conduct of the mock exercise.

He also highlighted the communication and other challenges faced during the mock drill exercise.

He said the NSDMA was learning how to prepare for better relief solution.

NDMA observer Kuldeep Singh lauded the use of technology like a drone to assess the calamity situation and the overall execution of the exercise.

He said the situation created for the mock exercise was the need of the hour considering the geographical structure and extreme climate in a state like Nagaland.

He observed that the state is able to respond well during a disaster because of the retention of organisational wisdom and skills through continuity of appointments that are mending the disaster management section.

He suggested the creation of groups which will be dedicated for the restoration of electricity and communications system.

The exercise was also carried out in Mon, Longleng, Wokha, Mokokchung, Phek, Kiphire, Tuensang and Peren.