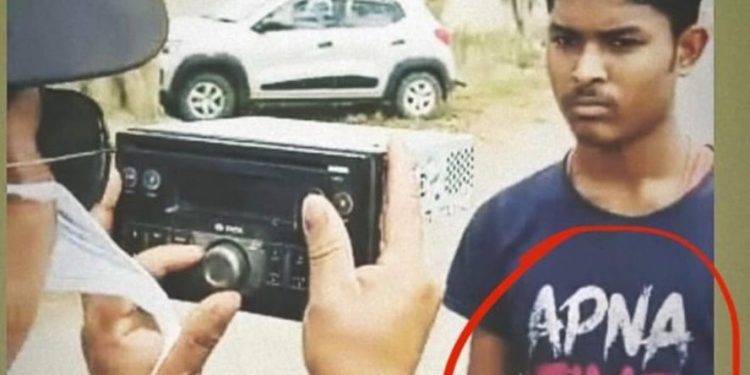 A migrant worker being screened for coronavirus by a car tape recorder.

Dimapur police arrested three persons for allegedly assaulting migrant workers and making videos of the incidents at different places of the town on Saturday.

The videos, taken in the wake of the lockdown against Covid-19 pandemic, went viral on social media platforms, drawing large-scale social media criticism even outside the Northeast region.

Two persons Valen Sote and Medovi Kiso of Vidima village have been arrested for physical assault of some non-locals and dissemination of a video clip recording the incident.

A case has been registered with sub-urban police station here in this connection, police said.

Based on a suo moto FIR, another person Heveto Awomi of Nihoto village has been arrested in connection with a video clip showing some non-local individuals being physically screened by a car tape recorder.

A case has been registered with Diphupar police station here in this connection.

The Naga Students Federation on Saturday condemned the incidents.

It urged the authorities concerned to take cognizance and ensure that strict action is initiated against the perpetrators of such unwanted acts.

In a release, the federation president Ninoto Awomi and assistant general secretary Siipuni Ng Philo said that some certain mischievous elements from within the Naga family had captured their act of physically and mentally harassing the poor migrant labourers and daily wagers.

“The miscreants have been circulating the same on various social media platforms while being unaware of the ripple effect it could have on the Naga people at large,” it said.

The federation said it was appalled by the insensitivity of the individuals involved in such ludicrous acts.

“It is truly unfortunate that incidents like these have come to the forefront during this difficult hour of the entire human race coming together and fighting the deadly Covid-19,” it said.

The federation said the Naga society treats every human being with dignity and provides no space for those who indulge in activities which dehumanize another.

It added that the Naga society is not one which promotes discrimination on communal and racial line as the principle of equity and justice has been the basic ethos of “our people” since time immemorial.

The NSF appealed to the Naga public to exercise utmost restraint in their dealings with fellow beings and not resort to acts which will portray the Naga society in a bad light in the eyes of the world.

It urged the Naga people to be prudent and unwaveringly abide by the teaching of Jesus Christ in Mathew 7: 12 “So, in everything, do to others what you would have them do to you”.