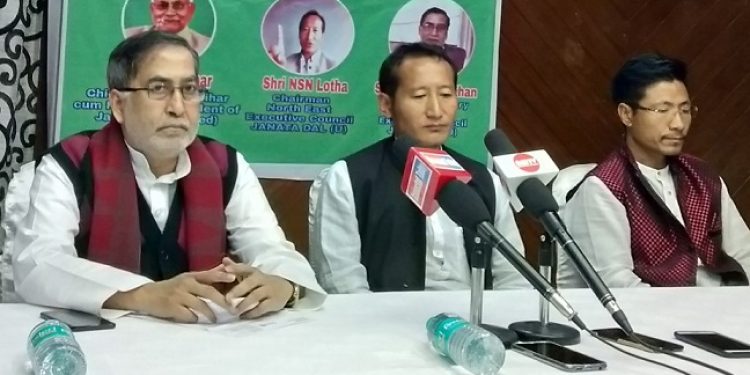 The Nagaland unit of JDU said the recent announcement and formation of the Delimitation Commission for Assam, Arunachal Pradesh, Manipur, Nagaland and Jammu and Kashmir is “very much justified”.

Welcoming the decision, the party said the matter had been pending for long for these states. It added that nothing could be indefinite and had to be given a logical conclusion as rest of the country had already completed the delimitation process in 2008 as per the recommendation of the Delimitation Commission, 2002.

Reacting to the contention of the ruling Nationalist Democratic Progressive Party (NDPP) that Nagaland was exempted from the purview of Delimitation Commission of 2002 because of the ongoing political talks, the JDU asked if it was so, was there any special notification by the government of India in this regard.

The party also sought to know if the NDPP was so concerned about the ongoing political talks then why it did not organise a rally or dharna in Delhi demanding expediting of the peace process.

It accused the ruling party of using the Naga political problem as a bait to fulfil its vested political interest by making it a prominent article in its election manifesto and then abandoning it after coming to power.

The JDU asked NDPP if it was so concerned about the ongoing political talks, then why it did not step down as a solemn sacrifice for the “frustrating delay” in the ongoing talks.

“What is the guarantee that the ruling party would step down after the peace talks are concluded when it was not able to exhibit any practical action to walk the talk while in power?” it asked.

It said the Nagas are keenly watching the commitment of the government and its actions towards fulfilment of its assurances made before the last election.

The JDU referred to the NDPP’s statement that tribal equity and dynamics of district representation are crucial factors that required widespread consultations on the delimitation issue.

The party suggested that instead of getting worked up with the announcement of delimitation process, an urgent all-party meeting should be convened to ponder on the frustrating delay of the ongoing peace talks.

An all-party delegation must go to Delhi and organise democratic agitation, besides meeting Prime Minister Narendra Modi to serve an ultimatum on the issue, it said.