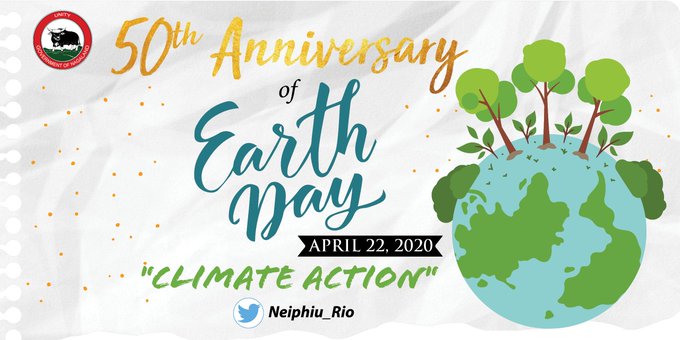 On International Earth Day, Nagaland chief minister Neiphiu Rio urged people to commit themselves in reviving the economy after the gloom of the coronavirus pandemic is over by promoting environmental protection.

He also said that many reports have suggested that the coronavirus pandemic has led to a drop in the pollution levels.

“In the wake of #COVID-19, reports say that pollution levels have dropped which is a silver lining to an otherwise dark phase in human history. Let us commit to support resuscitating the economy through promoting health and environment protection, post #COVID19. #EarthDay2020,” Rio tweeted.

Earth Day is celebrated annually on April 22 to demonstrate support for environmental protection.

It was first started in 1970 when a huge number of Americans, mostly school and college students, took to the streets with a peaceful demonstration in favour of environmental reform.

The demonstration was carried out after a oil well drilled in California in 1969 blew out leading to the spill of a huge amount of oil leading to a large scale destruction of aquatic life.

Various media reports have stated that the reduction in traffic and shutting of factories due to the nationwide lockdown had significantly lowered air pollution levels across the country.

Meanwhile, the quality of the water of the river Ganga has also increased as there has been a halt in major industrial activities which contribute largely to the water pollution in the river.