The president of Nagaland state unit of the Bharatiya Janata Party, Temjen Imna Along was caught on camera dancing in a discotheque in New Delhi recently.

The video purportedly shot by some admirers on mobile phones has gone viral in social media with more and more shares every passing minute.

Along, who is known to possess a colourful personality was bestowed with the responsibility of leading the saffron brigade in Nagaland around one year back, in June last year.

The move was seen as a surprise move when BJP national president Amit Shah, appointed Temjen Imna Along as president of Nagaland state BJP, replacing Visasolie Lhoungu who has been the state president since January 2016. Lhoungu’s three-year tenure was then scheduled to end in January this year. 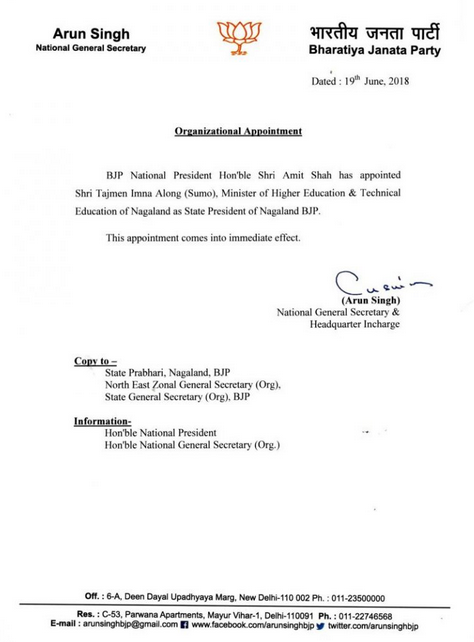 The dramatic handover of charge to Along, a decision, taken by the BJP central leadership, took several workers of BJP Nagaland by surprise.

The appointment letter had itself evoked much curiosity as there were abundant scope of suspicions of it being fake – it was not on the official saffron-green BJP letterhead and misspelled the minister’s name apart from putting his ‘nickname’ on it.

According to the letter, the appointment was given to ‘Tajmen Imna Along (Sumo)’.

Along’s presence in a nigh club in the national capital, dancing to the tune of party music and surrounded by damsels has raised several eyebrows in some quarters.

While some were of the view being a public figure, one needs to maintain certain decorum. While some back home said, Nagas are known to love music and dance and there is nothing wrong in someone unwinding after a tiring day in Delhi.

Anglong was mired in controversy on several occasions earlier.

He had invited the ire of many back home for his ‘brave but infamous’ stunts in Hindutva ideology vs Christian’s ethic, like addressing the Legislative Assembly in Hindi, which was first of its kind and starting with ‘namaste’ with folded hands.

His attempt to spray ‘Vajpayee’s Ashes’ into Nagaland’s rivers had also drawn much criticism at that point of time.

The Nagaland BJP chief was also on the firing line when he had said, ‘Nagas are all Indian’.