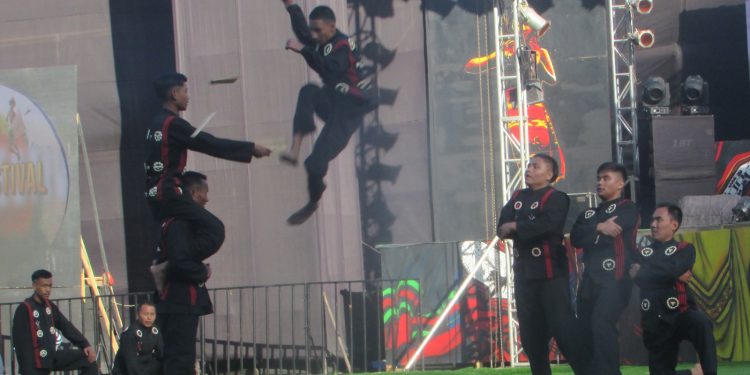 Naga Kiti Silat, a form of martial art, enthralled the spectators and visitors on the 8th day of the ongoing Hornbill Festival at the Naga Heritage Village in Kisama near Kohima on Sunday.

The Naga Kiti Silat fighters performed different forms of martial art such as Tunggal, Tanding, Ganda and Regu to the delight of huge spectators.

The event was organised by Nagaland Pencak Silat Association in collaboration with Nagaland Tourism department.

Established on January 15, 2016, under the presidentship of Khevishe Sema, the Nagaland Pencak Silat Association is affiliated to the Indian Pencak Silat Federation.

Silat martial art involves striking, grappling techniques and throwing and the performers are allowed to use certain types of weapons.

The martial arts, which has now spread to 93 nations, is quite similar to indigenous Sumi Naga kick fighting known as “kiti” or “Apkhu-Kiti” which originated during the time of their forefathers.

The primary purpose of the art is to build up the fitness among the local youths for settlement of any dispute.

It is an artistic sport that originated in South East Asia.

The purpose of Naga Kiti Silat is to develop and promote Pencak Silat and its values through unity and friendship among all tribes in Nagaland and as a valuable indigenous art.

Pencak Silat is an umbrella term for a class of related Indonesian martial arts. It is a full-body fighting form incorporating strikes, grappling and throwing in addition to weaponry.

Pencak Silat offers soft simple exercises for everyone wishing to improve their physical strength. It also employs body movement and develops balance and economy of movement in each individual. It is practiced purely for sports and fitness.

Players of the association won many medals in the national and international level Pencak Silat championship.

So far, 32 states and union territories in India have affiliated to the Indian Pencak Silat Federation.

Pencak Silat is recognised by the union ministry of youth affairs & sports and the ministry sponsors cash awards and special scholarships to the international Pencak Silat medalist every year.

In the cultural extravaganza ‘Cultural Connect’ of the day, 17 different tribes enthralled the spectators and visitors with their performances.

Assam governor Jagdish Mukhi graced the morning session of the cultural events as the special guest while director general of Assam Rifles Lt. Gen Sukhdeep Sangwan was present as the honoured guest.

Nagaland health and family welfare minister S. Pangyu Phom and adviser to industries and commerce department Imnatiba were the hosts of the programme.