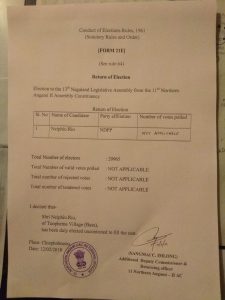 The NDPP-BJP alliance in Nagaland has now one seat in their kitty.

This is the second such victory for Rio. Rio who is Nagaland’s lone Lok Sabha MP earlier won uncontested as the Congress candidate in 1998.

“The NPF candidate withdrew his nomination today and the only other candidate of the NDPP was declared winner,” Nagaland’s Chief Electoral Officer Abhijit Sinha said.

Rio contested and won the Lok Sabha polls in 2014 after serving as Chief Minister for 11 years since 2003.