Separate statehood demand has surfaced again in Nagaland. The Eastern Nagaland People’s Organisation (ENPO) in Nagaland, has revived its demand for a separate state “Frontier Nagaland”.

At a meeting with its federating units in Tuensang on December 21, the ENPO unanimously resolved to urge the Government of India to respond to its demand for a separate state before declaration of election to the Nagaland Legislative Assembly due early next year. 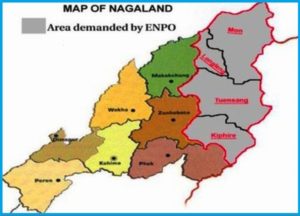 The meeting was called after two of the constituents of ENPO -the Konyak Union (KU) and the Phom Peoples’ Council (PPC) – had asked for convening of the meeting to deliberate on boycotting the forthcoming State poll to intensify their demand for a separate state known as “Frontier Nagaland” state.

The meeting further declared, affirmed and resolved that through constitutional and democratic, symbolic and preliminary expression to be followed with successive agitational campaigns if the Centre does not accede to the demand of the ENPO.

The ENPO also declared its support for an early declaration of an honourable Naga solution which should be acceptable and beneficial to all as desired by the Naga public in general, the resolution passed at the meeting said.

The six tribes of ENPO also resolved to cooperate with the organisation with regard to resolutions adopted. The six tribes have already rejected offer of autonomy.

In the event of failure to respond to the demand, the meeting further unanimously resolved that if situation warrants the ENPO public shall ask/urge/force 20 elected members representing Nagaland Legislative Assembly to immediately pave way in order to arrive at an amicable solution to the demand of ENPO by way of vacating their respective seats, the resolution added.

The day-long “highly agitated deliberations” on the issue of formation of a separate resolved to demand full-fledged state of Eastern Nagaland with its own Legislative Assembly, Secretariat, High Court or a Bench of the Gauhati High Court, a separate fund of its own specially allotted from the Union Budget for Eastern Nagaland and special protectoral provisions in respects of land and its resources, customary laws and special powers to the village and tribal councils.