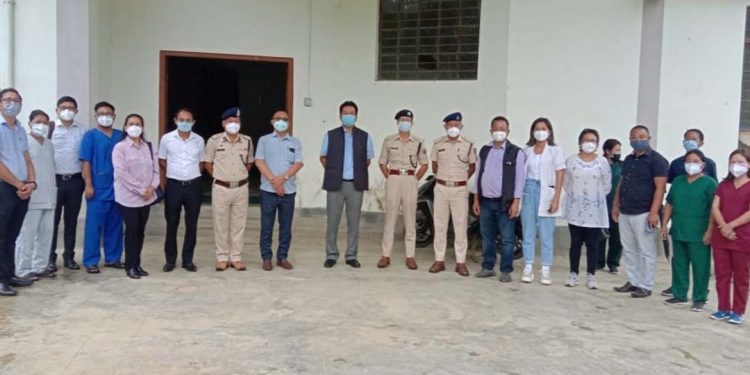 S Pangnyu Phom with other officials during his to Longleng.

Holding a review meeting with the Longleng District Task Force (DTF), civil societies and churches at Longleng deputy commissioner’s office complex, Phom said as per the direction of the central government, the ongoing lockdown in the state will continue till the positivity rate comes down to below 5%.

He said unlike the first wave, the second wave has caused huge casualties in the country not because of lack of medical facilities but due to negligence of the patients who come to the hospital at the last hour.

On June 16, the state high-powered committee on Covid19 extended the statewide lockdown for the fourth time from June 19 to June 30 after reviewing the situation in the state.

It observed that the positivity rate of Covid19 in the state continues to remain high, above 5%, in all the districts of the state, warranting the need for taking adequate measures for preventing the spread of the pandemic.

Stating that the government is giving special focus on the health sector to combat the pandemic, he said the state government is committed to upgrading the overall health care facilities of the state and providing the best services to the people.

Phom said the government has decided to deduct 10% from Local Area Development Programme fund and another 15% from common pool to purchase urgent medical requirements such as pulseoximeter and oxygen concentrators for every functioning health sub-centre in the state.

In this regard, he directed the DTF to make an assessment of the required equipment in the district.

Phom congratulated the Longleng District Task Force led by deputy commissioner M. Shayung Phom, police, medical personnel, village guards, NGOs, civil societies and churches for working together as a family to combat the pandemic and making Longleng as one of the successful districts in Covid19 management in the state.

He asked all the government officers and staff posted in the district to come forward and extend their helping hand to the medical department and the people during this crucial time.