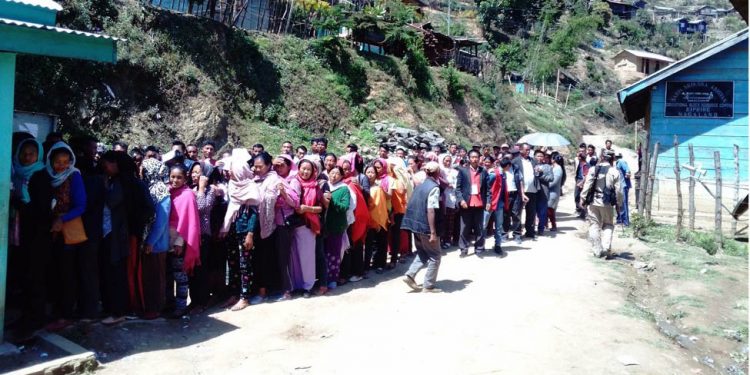 Voters in Kiphire district in a queue to cast their votes. Image credit - DIPR

He said the figures were based on information of polling progress updated by the respective district election officers and that the actual voter turnout can only be calculated only after all the polling parties submit their reports.

The polling percentage is subject to change, he added.

Sinha said there were no reports of violence in both the Lok Sabha election and the by-poll.

He said the polling by and large passed off smoothly and peacefully.

The CEO confirmed the receipt of a complaint regarding a polling station in Lumami where it was said the bulb of the button for a particular candidate was lit against other buttons.

He informed that the matter was inquired into and checked by the Zunheboto deputy commissioner along with all the polling agents and other officials, and the photograph that was being circulated in the social media was not correct.

On booth capturing allegations in Aonglenden Assembly constituency, the CEO said there was no specific complaint or information about such incidents.

It was learnt that some youth were attempting to cast proxy votes and there was some scuffle.

However, police intervened and no further such incident occurred.