A view of proceedings of Nagaland Assembly on March 24, 2018. Photo: Northeast Now

Nagaland Minister for Higher and Technical Education Temjen Imna Along of BJP spoke in Hindi in the Assembly while taking part in the debate on Governor’s address on Saturday, prompting Opposition Naga People’s Front (NPF) to raise an objection. This is for the first time in the Nagaland Assembly that a member spoke in Hindi.

The Opposition members referred to Rule 28 of the Rules of Procedure and Conduct of Business in Nagaland Legislative Assembly that says “The Business of the Assembly shall be transacted in English or in Naga-Assamese”. If any member cannot express himself in any of these languages he may address the Assembly in his mother tongue for which he will have to make over in advance a copy of such speech to the secretary written in English, according to the Rule. 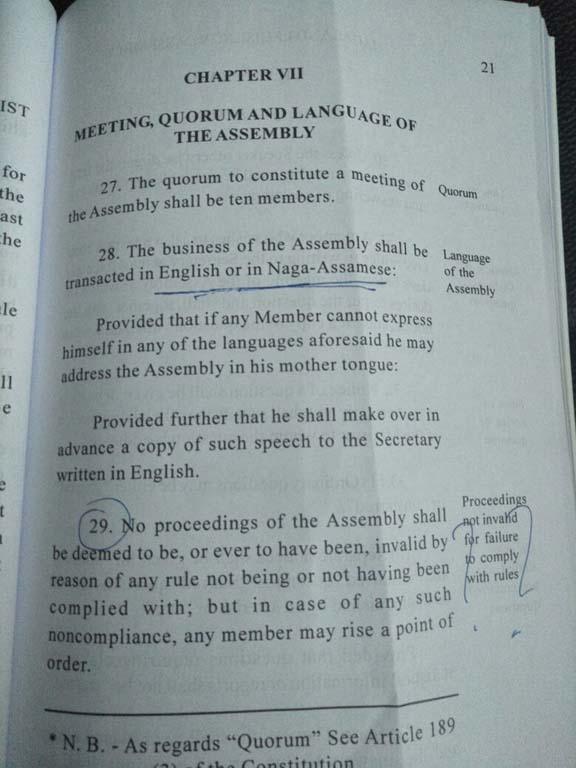 Along requested the Speaker to allow him to speak in Hindi for just a few seconds to which the latter gave his nod. However, after a few seconds, the minister started speaking in English in a very polished, classic and fluent way.

Meanwhile, Chief Minister Neiphiu Rio informed the House on Saturday that he came to know about Governor PB Acharya’s statement that the Naga political issue would be resolved within six months through the media only. He said he had not received any official communication in this regard from the Governor’s Office.