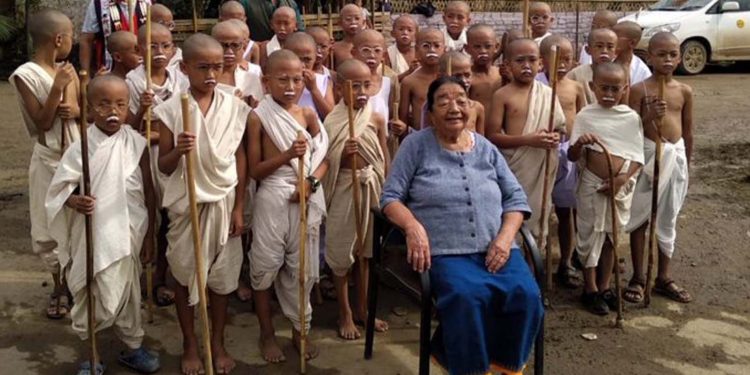 A group of children dressed as Mahatma Gandhi paid a courtesy visit to Gandhian and Padmashri Lentina Ao Thakkar, wife of the founder of Nagaland Gandhi Ashram at Chuchuyimlang on Wednesday.

The children, led by the caretaker of Nagaland Gandhi Ashram, Chuchuyimlang in Mokokchung district of Nagaland, called on Padmashri Thakkar on the occasion of Mahatma Gandhi’s 150th birth anniversary.

According to reports, to mark the birth anniversary, the Nagaland Gandhi Ashram presented a street play on cleanliness and life & teachings of Mahatma Gandhi at the central point in Imlong Place junction of Mokokchung on Tuesday.

The street play was performed by the children dressed as Mahatma Gandhi under the leadership of the ashram’s caretaker Aotoshi in presence of the Mokokchung additional deputy commissioner W. Manpai Phom.

Octogenarian Lentina Ao Thakkar is the first woman in Nagaland to be trained in the Gandhian way of social work.

She was awarded the Padma Shri last year, 68 years after she began training at the Kasturba Gandhi Ashram in Guwahati.

Born in Merankong village of Mokokchung district in the then Naga Hills district of Assam, Lentina Ao Thakkar was the first girl in the village to reach up to Class VI.

She returned to Chuchuyimlang in 1955 to start serving the people, especially women.

Thakkar worked selflessly to spread the ideals of Mahatma Gandhi and in the course of his social and humanitarian activities, he became a renowned Gandhian.