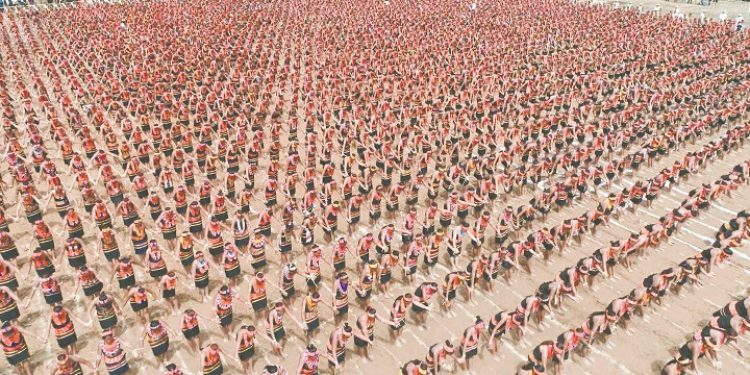 The Konyak Union on Wednesday said it was declared the Guinness World Records has acknowledged as record holder for the largest traditional Konyak dance consisting of 4,687 women participants.

The approval for setting the record was received at 9:01 pm on Tuesday night from the Guinness World Records, Konyak Union president Manlip Konyak stated in a release.

“The largest traditional Konyak dance consists of 4,687 participants, and was achieved by the Konyak Union (India) in Mon of Nagaland on April 5, 2019,” the letter of approval for the record holder said.

The official attempt to make the record was made during the Konyak Aoleang-cum-Mini Hornbill Festival in Mon town on April 5. The 4,687 women from over 115 villages under the district sang and danced in full Konyak Naga traditional attire for five minutes and two seconds.

The Konyak Union thanked all the participants, organizers and well-wishers for their contribution and support in accomplishing this great achievement.

The lyrics to the song, written specially for the event by A Peihwang Wangsa, speaks of the arrival of spring and welcomes the Aoleang Monyu festival of the Konyak Nagas while invoking the blessing of Wangwan (traditionally believed to be the divine spirit of blessing) upon the Konyak Nagass, upon Nagaland, the earth and the environment.

The dance is an old traditional Konyak dance which is usually performed during the festival.