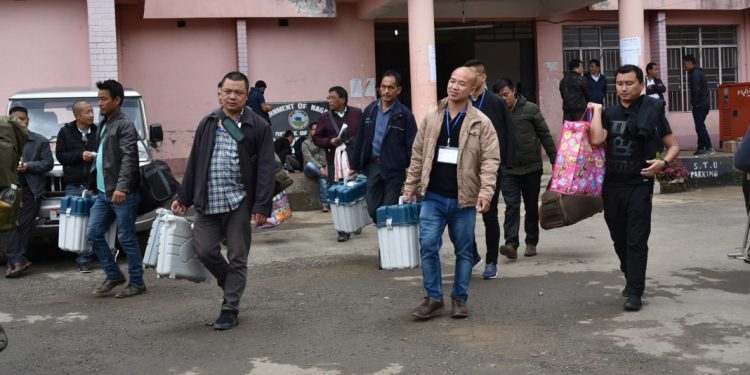 Nagaland chief electoral officer (CEO) Abhijit Sinha said all arrangements are in place for the conduct of free, fair and peaceful Lok Sabha polling and by-election to Aonglenden Assembly constituency in the State on Thursday.

The CEO requested all the voters in Nagaland to come out and vote on the day of polling. He also urged the electorate to vote fearlessly without being influenced by the consideration of race, caste, religion, language, community or any inducement.

In a release issued by his media cell on Wednesday evening, Sinha said all the 2,227 polling parties have reached the polling stations by 7 pm on Wednesday.

He said out of 2,227 polling parties in the State, 325 of them left on Tuesday, the media cell of the CEO said in a release.

The CEO said besides the security personnel in all the polling stations, striking reserves are being kept at many locations so that in case law and order issue crops up they can move swiftly to those locations and sort things out.

About 250 sector officers, sector magistrates and sector commanders will be moving around along with security forces. They will be visiting polling stations and ensure that everything is fine, the release stated.

Sinha said the sector officers will also be carrying the reserve machines and there will be control rooms at his office and district election officers’ offices. Poll percentages will be conveyed in every two hours, he said.