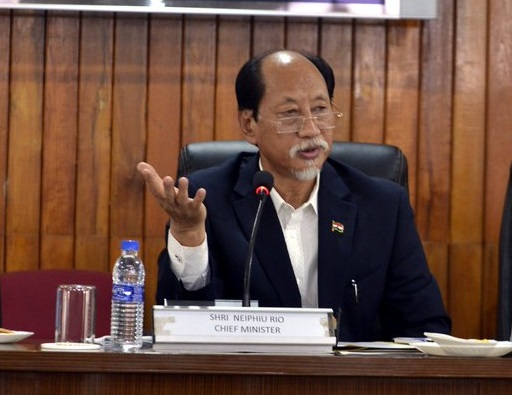 Nagaland Chief Minister, Neiphiu Rio on Monday said that since Naga people did not have work culture they are not concerned about the state’s economy.

Asserting that life was all about economy, Neiphiu Rio said that ‘unless one is self-sufficient, you are at the mercy of others’.

Pointing out that the economy of most of the villages was agrarian, Neiphiu Rio said the agriculture and allied sectors should particularly produce sufficiently for sustenance.

Rio also requested all the heads of departments of the district to make an effort and sincerely work with the villagers closely and built their economy.

Further, the Chief Minister called upon the government employees to collectively serve the people so as to ease their life and uplift the economy of the people particularly in rural areas.

He suggested that whatever schemes have been given to one village in a year or for a period could be monitored by the Deputy Commissioner for any overlapping or duplication.

He also asked the officials to come up with an annual progress report of utilizing the local area developing fund, which would be transparent in nature and would give responsibilities to the officers or the villagers to implement the scheme.

Recalling his first time member in DPDB as area council chairman way back in early 1980s and then his association with the board, the Chief Minister said that DPDB made progress over the years.

In his introductory remarks, Kohima DPDB chairman and advisor, Youth Resource & Sports, Er Zale Neikha, urged all the members to cooperate and work with sincerity while discharging one’s responsibilities.

He also requested the members to contribute constructive inputs towards the programme of DPDB.