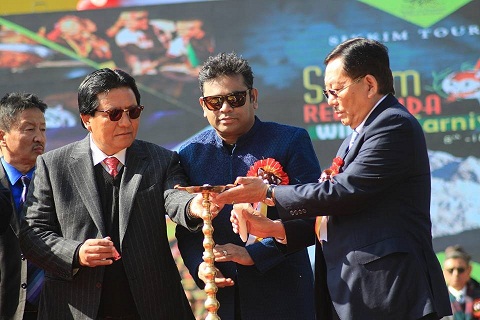 The Sikkim tourism department is also trying to give an international feel to this year’s fest with participation from Britain, Australia, America, Nepal and Bhutan.

The world famous composer is also the brand ambassador of Sikkim. The concert is likely to be held at the Paljor Stadium in Gangtok.

“We are expecting about 70,000 people to come for the concert. We will only have to bear about 10 to 15 per cent of the cost of hosting the show. Rahman will be raising the money for the show on his own,” said Ugen Gyatso Bhutia, the Sikkim tourism and civil aviation minister.

Although AR Rahman had visited the Himalayan state twice till now, this will be his first performance there. He was the chief guest in last year’s carnival.

Bhutia said around the time of the festival, actor Priyanka Chopra will also be visiting the state.

“She is not only a Bollywood star, but an international celebrity. She will come here on December 5 and attend the premiere of the Nepali movie Pauna, which is produced by her company, on December 6,” he said.

The tourism minister said the dates of the festival were yet to be firmed up, but indicated that it could be sandwiched between the Rahman and Chopra visits.

“This time the festival will be a little different. We are trying to lend an international flavour to the festival. The British Council will be taking part. There could also be participation from Australia, America, Nepal and Bhutan. However, the major focus will remain on local events,” he said.

Bhutia said efforts were also on to bring Bollywood star Sanjay Dutt to Sikkim sometime around Christmas and New Year to spread awareness of drug abuse, reports The Telegraph.

Sikkim government has decided to decriminalize the use of contraband substances, and treat drug abuse as a disease.