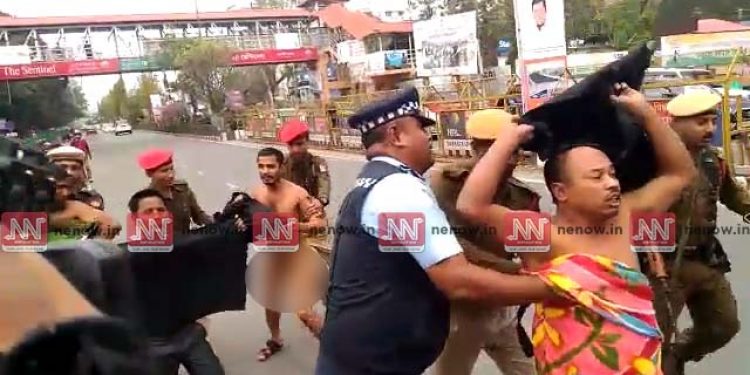 Five KMSS activists, who were completely naked, marched on GS road outside the Assam Secretariat at Dispur on Saturday.

While Prime Minister Narendra Modi was addressing a public rally at Changsari, members of Krishak Mukti Sangram Samiti (KMSS) on Saturday staged a nude protest outside the Assam Secretariat at Dispur against the Citizenship (Amendment) Bill.

Six KMSS activists, who were completely naked, marched on GS road outside the Assam Secretariat at Dispur.

The police personnel outside the secretariat immediately took them into custody.

Three KMSS members had staged a similar nude protest in at Dispur against the Citizenship Bill on February 1.

Last month, before the controversial bill was passed in the Lok Sabha, a group of Assamese youth had staged similar nude protests outside Parliament in New Delhi and at Tinsukia.

Meanwhile, when Prime Minister Modi was performing Bhoomi puja for AIIMS at Changsari, AASU activists burnt his effigy at Amingaon on the city outskirts. Aminagaon is around 12 kilometers from the venue of PM’s programme.

The AASU supporters also released black  balloons at Changsari in protest against Modi’s visit and the Citizenship Bill. The AASU activists further staged a protest in front of Swahid Nyash at Uzan Bazar and burnt Modi’s effigy.