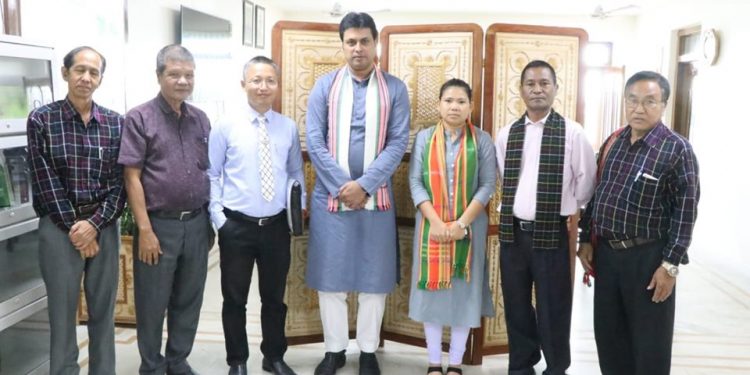 The mizo people who are living in Tripura are now demanding for Autonomous Regional Council.

The mizo people called a strike at Jumpui hill on Wednesday but later it was withdrawn after the assurance from chief minister Biplab Kumar Deb.

Sources said, the chief minister assured them to talk with the Mizo leaders about their demands and later on the strike was called off.

The Mizos who are living in Tripura have been demanding autonomous district council since last 40 years.

Now they are thinking to go all out for their demand and start agitation and movement.

The Mizos of Tripura used to live in Jampui and Shakan Hills which is known as Lusai hill of North Tripura.

It is a bordering part of Tripura-Mizoram border.

They are often known as Lusai.

They are very little in number in Tripura.

Linguistically they speak a language originated from Kuki-Chin linguistic family and they have so many clans.

For the last fifty years, majority of them have embraced Christianity.

They have their own customary laws and village council.

Now they are demanding that Jumpui hill should be created as ‘Jampui Hill Autonomous Regional Council’ for the Mizo people.

They have submitted a 15 pages memorandum to chief minister with the demands of development of road, infrastructure, school and ST status for the Mizos.

They also demanded for recognition of their customary law.

Sources said the bilateral discussions continued till one hour.

The chief minister Deb also wrote in his facebook page about this meeting.

He wrote, “Met the delegation team of Jampui hill today along with Minister Shantana Chakma ji. Had productive discussion with them regarding various ongoing issues.”

Zairemthiama Pachuau the member of the delegation team and general secretary of Mizo Convention also told that the discussions with chief minister was positive.

He said the chief minister was very much positive towards their demands.