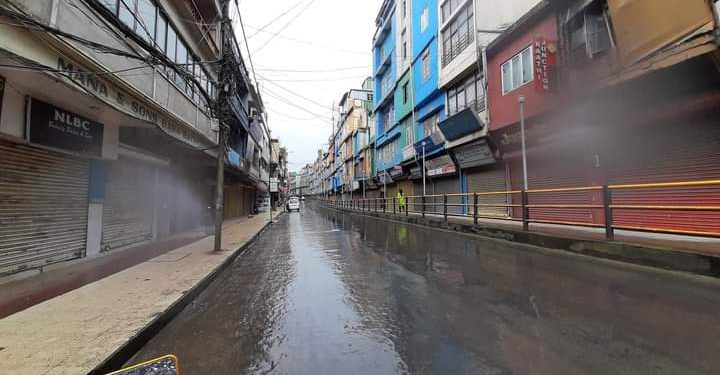 A deserted street during lockdown in Aizawl. (File image)

The Mizoram government will open its border with Assam and Tripura and Lengpui airport only thrice in a week to regulate movement of people from August 24 following a spike in Covid-19 cases in the state, a state home department official said on Thursday.

The order to this effect was issued by state chief secretary Lalnunmawia Chuaungo, who is also chairman of executive committee of State Disaster Management Authority, on Wednesday, the official said.

The order stated that Lengpui airport and two entry points- at Kanhmun on the Mizoram-Tripura border and Vairengte on the state border with Assam will be open only on Mondays, Wednesday and Friday for entry of persons by flights and road transportation starting from August 24 until further order.

Mizoram has sealed international and inter-state borders barring a few entry points, which were opened for vehicles carrying goods, in March to prevent the spread of novel coronavirus.

Lengpui airport and inter-state border at Vairengte and Kanhmun were opened for movement of people since June, according to officials.

The government order opening Lengpui airport and inter-state borders thrice a week said that the surge in inter-state movement of people due to resumption of economic and livelihood activities has resulted in the spike of COVID-19 positive cases within the state recently.

Mizoram has banned entry of trucks and other vehicles carrying goods barring essential commodities into the state since August 7.

The ban was imposed after a sizeable number of truck drivers and their helpers coming from outside the state have tested positive for Covid-19.

According to health department, at least 129 truckers and their helpers from outside the state have been diagnosed with the virus till Thursday.

There are 472 active patients while a total of 402 people have already recovered.

Meanwhile, the state government extended complete lockdown imposed in the state capital to facilitate extensive tracing and testing of people till 4.30 am of August 24.

State health department spokesperson on COVID-19, Dr. Pachuau Lalmalsawma said that at least 215 samples have been tested in Aizawl city area during conduct of random sample test since Tuesday and all of them came out negative.