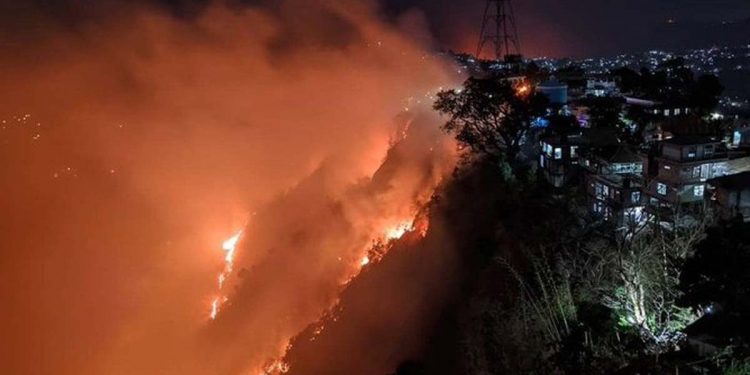 The Mizoram government on Wednesday constituted a state-level special investigation team (SIT), headed by state chief conservator of forest (administration) RS Sinha to probe the series of forest fires, which broke out in several parts of the state recently.

A notification issued by the Mizoram government said the investigation team will find out the reasons and causes of the outbreak of fires, assess the extent of damages, examine and document the various means deployed for control and containment of the fires.

The SIT will also examine the existing provisions of laws, instructions and institutions in place to mitigate, prevent and respond to fires and to recommend any modifications or supplements that may be needed, it said.

Besides, the investigation team will make recommendations for measures, modalities, regulations, among others that may be put in place to avoid an outbreak of forest fire in the future, it said.

The team is instructed to submit its recommendation or report within two months of its constitution, the notification said.

The Mizoram government also instructed all departments and government offices from which the investigation team requires information and cooperation to provide the same without delay.

Earlier on April 27, the Mizoram police formed a special investigation team (SIT), headed by a sub-divisional police officer (SDPO) to probe the forest fire in Lunglei district, following a complaint filed in connection with the recent fire.

Lunglei superintendent of police (SP) Rex Zarzoliana Vanchhawng said no person has been arrested in connection with the incident till date.

The devastating outbreak of wildlife fires, which broke out in several parts of the state in April, has devastated vast tracks of forest areas, farmlands and private properties.

According to state deputy conservator of forest (headquarters) PC Laltanpuia, at least 3,003 fire incidents, including forest fires and fire from burning of jhum lands, were reported in six districts covering an extent of 9,428.88 hectares of land between November 2020 and April this year.