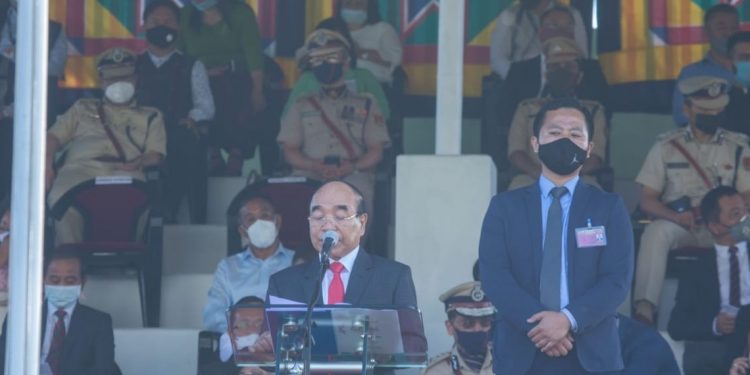 Zoramthanga thanked frontline workers, medics, churches, NGOs, local volunteers and the people in general in supplementing the government's effort to curtail the spread of Covid-19.

Mizoram chief minister Zoramthanga on Saturday said the state is facing twin challenges- the pandemic and earthquakes, and urged the people to follow precautionary measures and adhere to health advisories to curtail the spread of novel coronavirus.

“Complacency in the face of a global pandemic like Covid-19 is not appropriate and therefore, it is essential that each and every one of us remain alert and cautious. We must work unitedly to contain the virus and tackle the challenges that come in the aftermath of the outbreak,” the chief minister said while unfurling the tricolour on the occasion of India’s 74th Independence Day in Aizawl.

He said that tackling primary and vital issues like health, livelihood, education, food and essential commodities, roads and transport as well as security will be very crucial and challenging in coming days.

Zoramthanga thanked frontline workers, medics, churches, NGOs, local volunteers and the people in general in supplementing the government’s effort to curtail the spread of Covid-19.

“As globally, countries are gripped with several insecurities. Let us continue to work tirelessly and valiantly for peace and security along with development in Mizoram,” he said.

Highlighting the government’s efforts to curtail the spread of Covid-19, he said active measures to tackle the virus was taken up by forming a state level task force on Covid-19 on the same day the WHO declared the outbreak “pandemic.”

He said that Mizoram was among the first states to announce a partial lockdown before the nationwide total lockdown.

“All entry points to the state, including lone Lengpui airport were closed on March 23 and Mizoram was one of the first states in the country to conduct Covid-19 screening in its airport to prevent the spread of coronavirus,” the 76-year-old leader said.

The former rebel leader turned politician also said that the state has confronted more challenges due to a series of earthquakes in several parts of the state amidst Covid-19 spread.

He said that more than 283 houses were damaged causing monetary loss to the tune of Rs 316.35 lakh due to the series of earthquakes that rocked the state since June 21.

On development projects, the chief minister said the state government is committed towards the successful implementation of state’s flagship programme Socio-Economic Development Policy’ (SEDP), which aims at accelerating progress in key sectors and transforming Mizoram into a welfare state.

Citing that road connectivity plays a vital role in development, Zoramthanga said available funds have been allotted for the construction and maintenance of roads under the state’s PWD.

He said that the state is giving priority to connectivity with neighbouring Myanmar.

“Bridges crossing Chhimtuipui and Tiau rivers are also planned and proposed to be constructed. The Centre has already approved this proposal and DPR for the four major roads connecting Mizoram and Myanmar have been submitted and sanction is awaited,” he said.

He added that one major road project connecting Myanmar has been already approved by the NEC.

According to the chief minister, there has been no major law and order problem in the state during this year due to efficiency of the state police.

Around 3,000 police officers and constables are currently deployed for various COVID-19 related duties, he said.

Independence Day was celebrated with a limited crowd due to Covid-19 spread across the state on Saturday.

The grand celebration was held at Lammual here.

In view of public safety, parade contingents and school students did not take part in the ceremony this year and the event was live telecasted on two local cable TVs for people to join the celebrations from their homes.