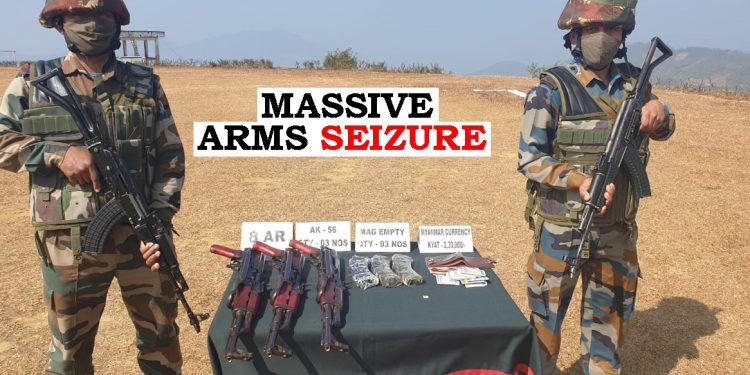 As many as 3 AK-56 series rifles, 3 empty magazines and 2.3 lakh in Myanmar currency have been recovered and seized by the troopers of Assam Rifles from the jungles of Zote in Mizoram’s Champhai district on Friday.

The seizure was made by the troopers of Assam Rifles’ Serchhip Battalion.

Based on specific information, a joint operation was carried out by the Assam Rifles troopers and officials of the Customs Department in Champhai district and seized the arms.

The weapons were seized just prior to a deal of the seized arms between a Myanmar national and an Indian national in a remote location along the India-Myanmar international border.

During the operation the forces were able to apprehend the person from the Indian side.

On the other hand, the person from the Myanmar side, upon getting alert about the presence of Indian forces managed to somehow flee.

However, the Assam Rifles troopers managed to snatch the bag of arms from the Myanmar national before he escaped and returned to his country.

“Ongoing smuggling is a major cause of concern for the state of Mizoram, especially along the India-Myanmar Border,” the Assam Rifles said in a statement.