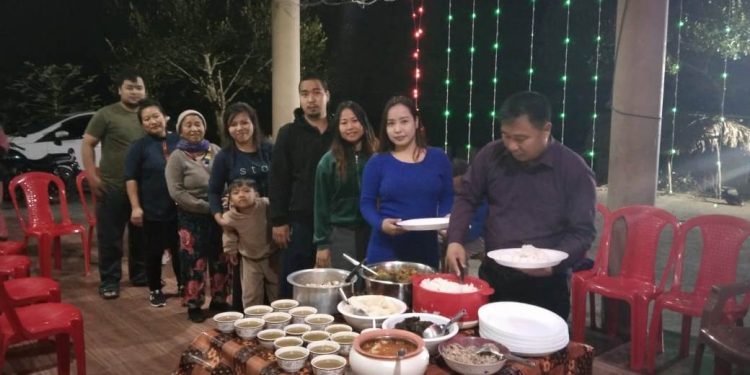 For the first time since Christianity was introduced in the picturesque Mizoram in 1890s, Christmas was celebrated in low-key manner on Friday as the Covid-19 protocols were in place across the state.

This year the state government has banned all such practices to prevent further spread of Covid-19.

However, the yuletide or Christmas spirit did not die down in the heart of the Mizos despite low key celebration.

Covid-19 on the other hand has resulted in a different and spiritual way of celebrating the birth of Jesus, a retired pastor HK Sumkam said.

Defying Covid-19 protocol, people on Thursday swamped markets and malls in Aizawl for pre-Christmas shopping though it was not the like in the previous year.

Churches of different denominations, held online programmes through local cable televisions and other media platforms to convey Christmas messages to the people.

Presbyterian Church, the largest denomination in the state, has been organizing Christmas live crusade through local cable TV since Christmas eve delivering sermons and singing Christmas songs to cheer up the mood of the people.

In most places, celebrations were held in family circles.

However, sounds of Christmas songs and praying were echoing from almost every household since Christmas eve to convey the message of peace and joy brought by the birth of Jesus.

While most people in towns celebrated indoors, some neighbourhoods in rural villages held worship services in group and dined together with minimum attendees allowed by the government.

In Mizoram, normally the Christmas spirit is high in rural villages.

People would construct bamboo makeshift halls for Congregational singing, make monetary contributions for a community feast and dine on banana leaves in the evening.

As community feasts were not possible this year, some churches donated their contributed money (for community feast) to the needy while other churches used it for buying meat for the needy.

Some families collected Christmas offerings, which they donated to the poor.

A Young Mizo Association (YMA) leader said that the traditional way of giving alms and assistance to the poor on Christmas eve this year was perhaps greater than the past.

Many groups, NGOs and individuals reached out to the poor, orphanages and rehabs with alms to convey the message of peace and love to the people to mark the celebration, he said.

A 79-year-old HK Sumkam said he was happy to witness Christmas though in such a low key celebration as the situation brought him a Christian way of celebrating Christmas, which he said every Christian devotee should follow.

“Christmas is not about worldly enjoyment, yet it is the day when Jesus was born to redeem our sin. So we should seek the infant Jesus with all our heart, welcome him and thank him for coming for our salvation then only you will celebrate a true Christmas,” he said, adding that he celebrated Christmas this time with his six-member family.

A 23-year-old youth, who refused to be named, however, blamed the government for putting restrictions in rural villages on par with towns in Christmas time.

While towns or urban areas are vulnerable to Covid-19 spread, rural villages are not like that because people hardly go out, no outsiders come in, he said.

This time Mizoram witnessed the 150th Christmas being celebrated in its soil after it was first celebrated by the invading colonial British troops back in 1871 near the Manipur border.