Police sources said at least three people including one minor girl were confirmed dead at Zemawbawk on the outskirts of Aizawl when a stone quarry was hit by a landslide on Saturday morning.

Two bodies were recovered after rescue operations, the recovered body was confirmed that to be of a minor girl supposedly helping her relatives working at the stone quarry, according to police sources.

Eye witnesses and quarry workers who were at the site said that the toll could rise, saying that they could not ascertain as to how many people were working at the quarry when the landslide hit. 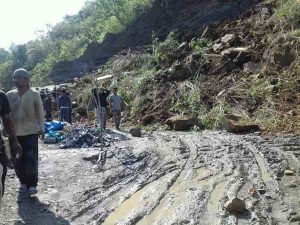 “We saw two women, one girl and one man there when rocks came crumbling down, there could be more people under the rubble,” said an eye witness.

Volunteers of the YMA are helping out the rescue force personnel and latest reports said that another body might be recovered very soon.

Rescue forces personnel opined that there were no sign of life after thorough examination of the site using life detector machines.