Head of world’s largest family passes away in Mizoram 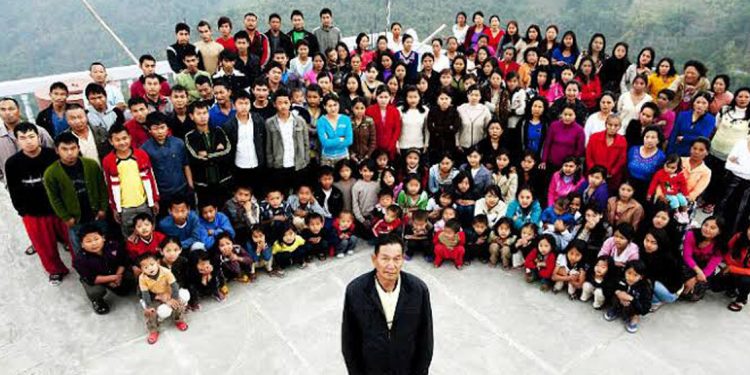 Zionghaka, also well known as Zion-a, the head of world’s largest family passed away at a hospital in Mizoram’s Aizawl on Sunday.

Trinity hospital director Lalrintluanga Zahau said that the septuagenarian was suffering from diabetes and hypertension.

After undergoing treatment at his home in Baktawng village for about three days his condition deteriorated and was rushed to Trinity hospital on Sunday, where doctors declared him brought dead at 3 am.

“Zion-a’s body was already cold by the time he was brought to the hospital after became unconscious on Sunday around 2:30 pm. We performed cardio-pulmonary resuscitation (CPR) to revive him but his electrocardiogram was already flattened,” Lalrintluanga said.

When contacted for the funeral, Ziona’s younger brother Hmingchuangthara was too busy to make a comment.

Also read: Mizoram has managed to fight against COVID19 with collective efforts: Zoramthanga

Zion-a was the leader of Chana pawl or Chhuanthar, a sect formed by his grandfather Khuangtuaha when the latter was expelled by Hmawngkawn village chief in 1942.

Since then the family has been living at Baktawng village, about 55 km from Aizawl.

Khuangtuaha was succeeded by his son Chana, who was the father of Zion-a.

The sect believes that the “millennium” (1,000 years which will begin with the second coming of Jesus Christ in the Bible) has already begun under its rule.

Around 400 families are members of this sect.

The sect also allows polygamy for its male members.

He is survived by 181 family members.

The four-story mansion in which Zion-a and his family lived at Baktawng, became a major tourist attraction with tourists coming from far and wide to witness the world largest family.

“With heavy heart, Mizoram bid farewell to Mr. Zion-a (76), believed to head the world’s largest family with 38 wives and 89 children. Mizoram and his village at Baktawng Tlangnuam has become a major tourist attraction in the state because of the family. Rest in Peace Sir,” Zoramthanga tweeted.

Though the chief minister has tweeted Zion-a as having 38 wives and 89 children, a local leader of Baktawng village said that the patriarch has 39 wives and 94 children.