First ever Indian Film Festival in Mizoram from January 23 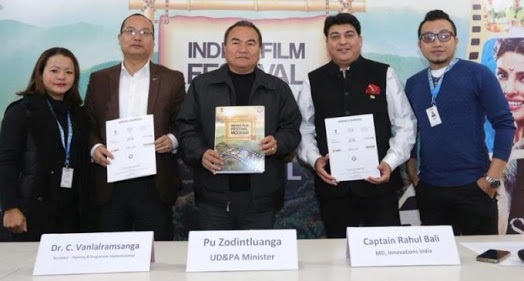 A galore of blockbuster movies are set to be showcased at selected locations across Aizawl at three-day Indian Film Festival from January 23.

The chief minister of Mizoram Lal Thanhawla will inaugurate the maiden Indian Film Festival in Mizoram and Savdhaan India anchor Susanth Singh will also make an appearance at the inaugural ceremony to be held at Vanapa Hall.

The mega film carnival is a part of the Swachh Bharat Abhiyaan initiative and will be jointly organised by Mizoram government and Innovations India Advertising and Events Pvt Ltd.

Organisers have roped in Savdhaan India’s Susanth Singh to add glamour to the festival. A Mizo dubbing of this Hindi detective serial has been a major hit in the local channels of Aizawl.

“Mizoram is a beautiful state that has largely remained unexplored till now as far as the world of films and cinema is concerned and in fact, Mizoram has a lot to offer to the filmmakers,” Captain Rahul Bali, MD Innovation and Curator of IFF Mizoram said.

The organizers are pretty much sure that it would surely benefit the state, as there is the possibility at higher stake that the Indian, as well as the global filmmakers, might choose the state and the other parts of Northeast to shoot their pieces, and it could benefit the local artists as well.

“The first ever Indian Film festival in Mizoram is sure to create a buzz about Mizoram and will act as a brilliant platform for the Indian as well as the International filmmakers who are interested in reaching out to a crossover audience in Mizoram thereby bringing in a lot of visibility and publicity for the state,” Zodintluanga, Urban Development & Poverty Alleviation Minister of Mizoram said.

During the festival Amitabh Bachchan’s blockbuster movie Sarkar 3 will be screened and the film producer Rahul Mittra will grace the screening with his presence. Another Bollywood hit movie Oh My God will also be shown and the director Umesh Shukla will be a part of the audience.

Apart from these hit movies Marathi, Gujarati, Manipuri movies will be screened during the three day movie gala.