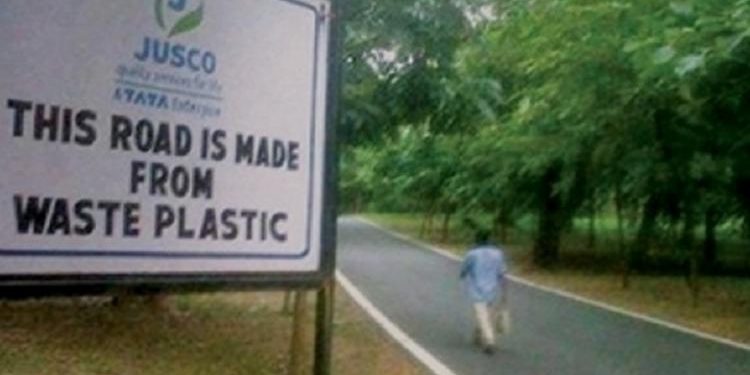 A road made of plastic wastes. Image credit - www.thenewsminute.com

A road made of plastic wastes would entice anyone to put his first steps on it.

A plan in this direction was mooted during a meeting on Sunday among Mizoram Chief Secretary Lalnunmawia Chuaungo, officials of Public Works Department (PWD) and Save Chite Lui Coordination Committee (SCLCC) members.

The meeting discussed construction of Mizoram’s first green road to be made completely out of plastic wastes.

The point of discussion aimed at plastic waste collected from river Chite, which flows through Aizawl, to be used for construction of the first green road in Mizoram.

Over two quintals of transparent polythene have already been collected from river Chite and its tributaries and handed over to the PWD officials by the SCLCC members for the purpose.

The road between Reiek village to Zokhua Cafeteria, which measures a distance of one kilometre, has been chosen as the proposed site for the first green road in the State.

The road will be built by the PWD Aizawl South Roads Division and is expected to be completed by the Anthurium festival which will be held at the end of this year.

As the first green road of the State is going to be an important landmark, the committee also decided that it would be necessary to form a monitoring group consisting of the members from this community and other NGO members to keep a hawk’s watch.

The Information and Public Relation department was also requested to film the road construction as a documentary to mark the first road of its kind in Mizoram.

It was proposed that such similar projects should follow suit, where, plastic wastes will further be used in the construction of ‘green roads.’