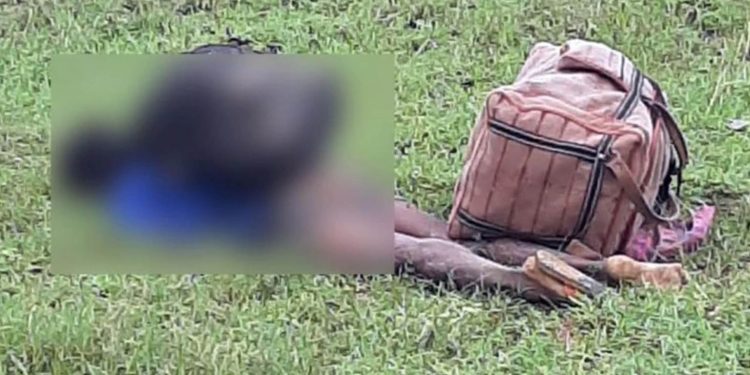 The migrant worker's body lay some metres away from a wild boar that had been killed the same way a few hours ago. Image credit: India Today

In Chhattisgarh, a migrant worker returning home was electrocuted on Saturday night.

The incident took place near Bhainsamuda village under Urga Police Station and the deceased has been identified as Dilharan Dhanwar.

He was working at a brick kiln in Allahabad before the lockdown.

The contractor, under whom he was working, had organised a bus and sent him back to Bilaspur in Chhattisgarh.

The deceased was accompanied by a number of other workers and their family members.

The deceased took an autorickshaw to travel to Kanki village and was then asked by local police to go to a government-run quarantine centre in Tarda village.

Before finally reaching home, the returnees are required to mandatorily stay in a quarantine centre for a stipulated time.

Dilharan Dhanwar, on reaching Tarda, came to know that the quarantine centre in the local school was not functional yet.

Moreover, the village headman also asked Dhanwar to not return home without completing the quarantine period.

Finding no place to go, Dilharan along with his wife Sumitra decided to walk back to their village discreetly.

The couple had walked barely half a kilometre Dilharan, who was in the lead, came in contact with a live wire and he was electrocuted and died on the spot.

The live wire was in an open space adjoining a forest patch and was meant to kill wild boars.

Dilharan’s five-year-old daughter was in his arms at the time when he was electrocuted, however, she managed to fling away.