Miao-Vijaynagar Road will be constructed by all means: Arunachal Governor 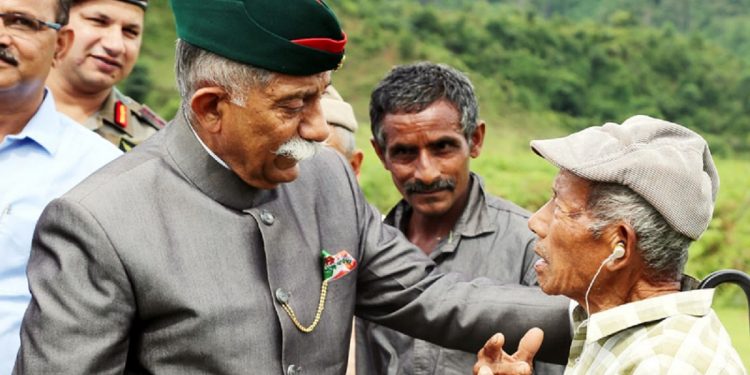 Arunachal Pradesh Governor Brig (Retd) B D Mishra on Friday said that the people of Vijaynagar are as important as any other citizen of the State.

He also said that the State Government is equally concerned about welfare and particularly for construction of road from Miao to Vijoynagar.

Mishra on Friday visited Vijaynagar, the easternmost and one of the remotest administrative circles in Changlang district.

The Governor said that the Miao-Vijaynagar Road will be constructed by all means and the purpose of his visit was to see for himself the challenges, which the people of circle are facing and to find solution of the problem.

Further emphasizing on education, health and agro-based enterprises for developing the Valley, he also took note of the need for strengthening these sectors.

Addressing the students, the Governor advised them to be sincere in their studies and also keep themselves physically fit.

He also asked them not to study just for certificates, but for knowledge.

Urging the girl students to compete with parity, he said that that society prospers where the girls do well in the outdoor fields.

He also distributed more than 700 T-shirts for the school students, with ‘Jai Arunachal’ motto printed in it.

Moved by the difficulties of the people due to shortage of table salt, the Governor distributed packets of salt to every household of the circle, which he had brought along with him.

The Governor later visited all the places on foot, including schools, health centre and Assam Rifles company post.

The desolate and isolated region of Vijaynagar, nestled in the Himalayas along the India-Myanmar Border takes around seven to 10 days to reach on foot through dense forests from the nearest town.

The circle is surrounded on three sides by Myanmar and the other side by a vast and thick forest of Namdapha National Park.

Spread across 8,000 square kilometres, Vijaynagar is unique for many reasons.

It was discovered by the Assam Rifles paramilitary force during an expedition named Srijit II in 1961 under Major General A S Guraya, IG of Assam Rifles.

The valley was later named by him after his son.