The Union ministry of home affairs (MHA) has asked the National Investigation Agency (NIA) to investigate the killing of National Peoples’ Party (NPP) MLA Tirong Aboh and 10 others in Arunachal Pradesh.

The ministry of home affairs in an order dated June 6, 2019 asked the director general of the NIA to investigate the case. 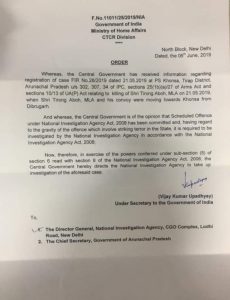 The Arunachal Pradesh cabinet on June 2 decided to recommend the assassination case of Khinsa West MLA Aboh and 10 others to the NIA.

Aboh and 10 others were killed in an ambush by suspected NSCN (IM) cadres at Bogapani in Tirap district of the state on May 21.

The legislator was on his way to Khonsa, the district headquarters of Tirap, from upper Assam’s Dibrugarh when suspected Naga militants opened fire on his four-vehicle convoy. Two police personnel were among the dead.

Aboh had contested this year’s assembly elections as a National People’s Party (NPP) candidate and also retained the Khona West assembly constituency by defeating his lone rival, Phawang Lowang of the BJP by 1055 votes.