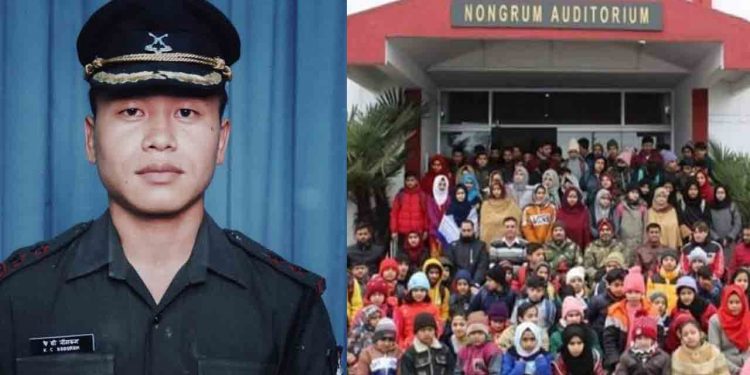 Meghalaya’s brave-heart Kargil martyr, Capt Clifford K. Nongrum, who is the state’s only recipient of Maha Vir Chakra, has now been accorded the status of an “immortal hero” in Srinagar.

The Jammu and Kashmir Light Infantry (JAKLI) Centre in Srinagar has built the Nongrum Auditorium in honour of Capt Clifford Keishing Nongrum.

Born to a Tangkhul father and a Khasi mother in March 1975 in Shillong, Capt Clifford was a brave officer of the 12th JAKLI, who sacrificed his life for the motherland.

His moment of valour came on July 1, 1999 when he and his platoon were assigned the task of capturing Point 4812 from the possession of the Pakistani intruders.

In fact, Point 4812 was nearly an impossible vertical height that he had to climb recapture it along with his platoon.

But with strong grit and determination, he moved towards Point 4812 from the south-eastern side to attack the enemy.

Capt Clifford emerged as a strong leader, who charged at the enemy with full force. He subsequently destroyed a bunker all by himself.

Without caring about his safety, he lobbed several grenades at the bunker and killed six enemy soldiers.

Moving through the fire zone, he attacked another Pakistani bunker, and was subsequently riddled with bullets.

Capt Clifford died at the battle field like a superman.

The soldiers of 12 JAKLI still recall the bravery Capt Clifford had exhibited during the Kargil war.

Now, the JAKLI has come up with the monument in his memory at its Regimental Center.

The Regimental Center is in Srinagar’s Airport Complex at Awantipora, with a winter setup near Jammu. Its regimental insignia consists of a pair of crossed rifles.

The regiment mostly consists of volunteers from the state of Jammu & Kashmir.