A preview screening of a short movie ‘La Mana’ or ‘Not Allowed’ will be held at the Department of Journalism and Mass Communication,  English & Foreign Languages University,  Shillong Campus at Umsing Mawkynroh on Wednesday at 3:30 pm.

The duration of the movie in Khasi and English language is 38 minutes.

The synopsis of the movie reads: The streets of Shillong are fraught with arguments… A Bihari filmmaker married to a Khasi finds himself using the phrase as the title of his new documentary to start discussions on the much-debated topic, the existential crisis of the hill tribe.

Are the men of the Indian plains stealing Khasi women’s affections?

Will the influx of outsiders and mixed marriages prove apocalyptic for the indigenous people?

Is matrilineality a curse in disguise? 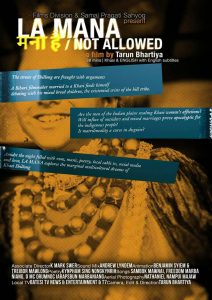 Bharatiya has also done the cinematography and editing of the movie.

K Mark Swer is the associate director, while sound mixing has been done by Andrew Lyndem.