Protest in Meghalaya over delay in implementation of Inner Line Permit

The Confederation of Meghalaya Social Organisations (CoMSO), a conglomerate of several organisations, staged a protest on Friday by putting up banners in various parts of the state demanding immediate implementation of Inner Line Permit (ILP).

Banners were put up in many public places of Shillong like Motphran, Khyndai Lad and other places urging Prime Minister Narendra Modi and Union Home Minister Amit Shah to implement the ILP without further delay in the entire Meghalaya. 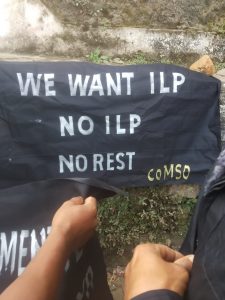 The banners also denounced the Citizenship Amendment Act (CAA) and stated that ILP is the mechanism that can protect the interest of the indigenous people of Meghalaya.

Spearheaded by the Hyñiewtrep Youth Council (HYC), the CoMSO is a conglomerate of more than 12 organisations in Khasi Jaiñtia and Garo Hills of Meghalaya which has been demanding implementation of the ILP.

The demand to implement the ILP in Meghalaya by the HYC has been aggressive after the then Congress-led government totally rejected ILP in 2013 and instead came up with what the government described as ‘comprehensive mechanisms’ in 2016 under the Meghalaya Residents Safety and Security Act, 2016. 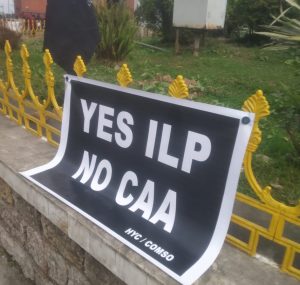 The HYC and CoMSO demanded that ILP be implemented immediately as the implementation of the permit system to contain the influx problem in Meghalaya would not require a huge amount of money.