Meghalaya chief minister, Mukul Sangma on Wednesday said the Meghalaya Mineral Development Corporation (MMDC) has been mandated by law to be utilized by the state government to help people mine coal in the state.

Replying to a call attention motion in the Assembly moved by Congress member, PN Syiem on involving MMDC for coal mining in the state, Sangma said the National Green Tribunal has banned only illegal coal mining not conforming to statutory laws pertaining to protection of environment, safety, and health. The NGT has banned unscientific coal mining in Meghalaya since April 17, 2014. 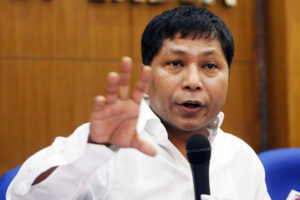 Sangma said that the government wanted to utilise the MMDC as an “instrument” to provide immediate relief to coal mine owners and miners in the state affected by the ban on coal mining while waiting for the Central government to invoke Para 12 A (b) of the Sixth Schedule to exempt Meghalaya from the applicability of Central laws on coal mining.

According to the chief minister, the MMDC will enter into an agreement with mine owners in respect of rights over their land.

“We have taken this exercise involving stakeholders to have complete clarity, but there seems to be some disconnect and lack of clarity on this. What is the problem in having MMDC as a partner rather than bringing some other businessmen from outside? We have suggested that 20 to 25 per cent profit should go to MMDC and the rest to the mine owners. But earlier, when miners brought in partners from outside to have investment support, majority of the profit is shared by the investors (from outside), but here, the MMDC is going to be just the opposite as it will invest, and people will not have to run around for financiers,” Sangma said.

On May 3 this year Meghalaya government said that coal mining could be legally carried out by MMDC where coal mining was banned three years ago by National Green Tribunal.

Under provisions of the Mines and Minerals (Development & Regulation) Act 1957, MMDC was eligible to apply for coal mining lease under existing laws and with the consent of the people, Chief Minister Mukul Sangma said here.