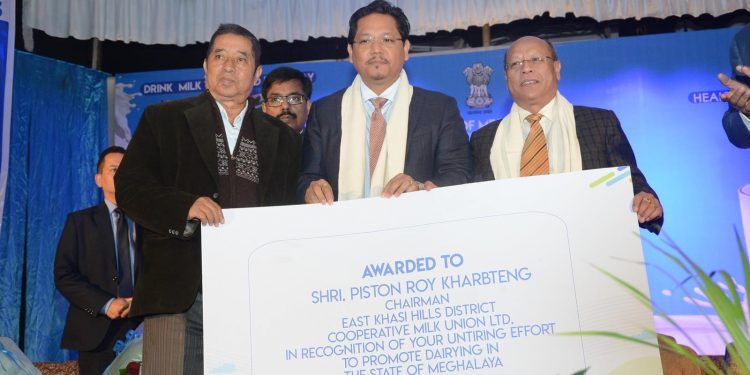 The Meghalaya government will set up a cattle ranch at Mawmerang village in South West Khasi Hills district and a cattle feed mill in Ri-Bhoi district.

Mawmerang village is famous for cattle rearing and all households produce milk and supply it to the entire South West Khasi Hills district.

Under the milk mission, the Meghalaya government has targeted about 2000 beneficiaries who would take up various programmes including cattle rearing to boost milk production.

Initially, 100 beneficiaries have been identified.

Along with the rest of the country, Meghalaya celebrated the national milk day on Tuesday.

To boost cattle rearing in the state, the Meghalaya government has prepared a DPR and submitted it to the Centre on the need to set up one cattle feed mill in Ri-Bhoi district.

The cattle feed mill will produce about 250 metric tons of feed in a day.

The National Milk Day 2019 was organized by the Animal Husbandry and Veterinary Department along with the Directorate of Dairy Development at the State Central Library in Shillong under the theme, ‘Drink Milk Today and Everyday’.

Awards were distributed to outstanding dairy farmers and winners of various competitions including 10 km Milk Marathon organized on the occasion of National Milk Day.

Addressing the gathering, the CM said the National Milk Day is an appropriate celebration to honour the contributions of Dr. Verghese Kurien the ‘Father of the White Revolution’, in transforming the dairy sector and rural livelihood across the country.

The total milk production requirement of the state is 2.3 lakh metric tons, out of which, the State currently produces only 86,000 metric tons.

The CM said the need to fill up the deficit in production is a huge opportunity for dairy farmers in the State.

“We are creating a very strong institutional setup in terms of cooperative societies which ultimately will give economic benefit to the people,” he said, while lauding the efforts of various dairy cooperatives in the state.

The CM also said the government has envisioned a roadmap to empower dairy farmers and uplift rural livelihood through various mission mode projects under the dairy sector in the state.

Deputy CM Prestone Tynsong said the National Milk Day was celebrated annually in India to make people aware about the nutritional and health benefits of milk.

He said the state government was committed to improve the dairy sector through various programs and initiatives to increase milk production.

Tynsong informed that the Milk Production Centre at Mawïong has been upgraded to increase production capacity from the current 12000 litres to 52000 litres per day, and similar upgrades are being planned for dairy plants at Tura and Jowai.

He also informed that the government is in the process of setting up a cattle ranch at Mawmerang in South West Khasi Hills on a pilot basis.