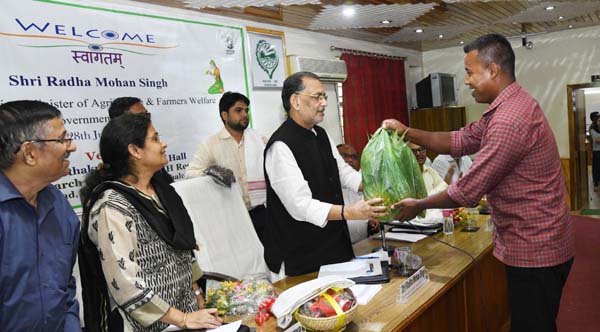 Union Minister for Agriculture and Farmers Welfare, Radha Mohan Singh appealed to scientists of Indian Centre for Agriculture Research to act as change agents and help in bringing about economic development of farmers in the north eastern region.

Singh also urged farmers and the institute not to limit themselves to only cultivation of crops but also to invest in allied sectors like horticulture, fisheries, bee keeping to increase their income.

Singh made this appeal at ICAR Complex, Umïam in Meghalaya on Saturday where he interacted with farmers and artisans. He also took stock of the activities and initiatives undertaken by scientists of the institute.

The minister also said that the activities and initiatives of ICAR and the farmers of the region should be documented and showcased so that these become role model for the entire country.

Reiterating the Centre’s aim to double farmers’ income by 2022, the minister exhorted officials to assist and advice farmers on ways to improve farming techniques and raise their income by producing more and reducing the input expenses.

The minister expressed his satisfaction that ICAR has been working towards increasing the income of the farmers with the introduction of high yielding variety of seeds and farming techniques.

Singh also stressed on the need to introduce and implement micro irrigation and integrated farming.

“Farmers of the North East are skilled and hardworking, but their hard work has to be supplemented with the introduction of technology,” he observed.

Later, Singh reviewed the implementation of Krishi Kalyan Abhiyan in Ri Bhoi district, one of the 112 districts where the Centre has launched the programme, covering 25 villages in each district with population of more than 1,000.

Singh also took stock of the implementation of other schemes of the government meant for increasing the income of farmers.

The meeting was attended by Joint Secretary, Ministry of Agriculture, Alaka Bhargava and other senior officials of Central and State government.