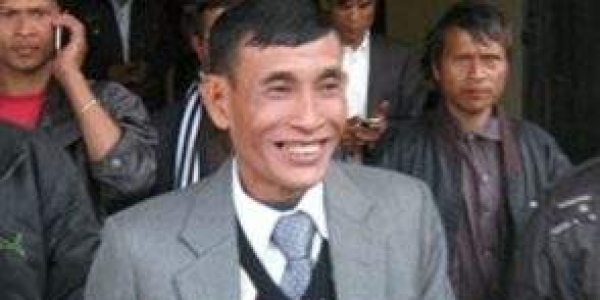 The Meghalaya High Court on Thursday rejected the bail plea filed by former Mawhati MLA Julius Kitbok Dorphang, who is in jail custody on charges of raping a 14-year-old girl.

The former legislator has been in jail for more than three and half years.

During the hearing, the State respondent stressed on the contention that the petitioner was charged with very serious offences involving a minor victim who is a village girl and the petitioner being a man of influence having been a member of the Legislative Assembly of Meghalaya, if released on bail, he will most likely to influence and intimidate the witnesses.

The hearing was taken up in the single bench of Justice W Diengdoh.

It was also submitted that considering the nature and gravity of the offence, being one under the POCSO Act, the mere fact that the petitioner has been in jail custody for a long time cannot be the yardstick for grant of bail to the petitioner.

Dorphang has claimed entitlement to be enlarged on bail that nothing adverse has been found against his character and conduct while in custody for more than three and a half years.

The former MLA also pointed out that one of the five co-accused has already been released on bail by this Court.

Meanwhile, the bench has also dismissed the petition filed by Dorphang against order passed by the Special Judge (POCSO), Nongpoh on September 4, 2018, which dismissed the application for determination of the age of the prosecutrix.

“The approach of the Trial Court while dealing with the application in question has the characteristics of an enquiry and the conclusion arrived at is a consequential result of the same and as such, this Court is in agreement with the submission of the learned AAG that there is nothing wrong with the impugned Order, the provisions of Section 397 Cr.P.C are therefore not attracted in this instant case. In view of the above, this Court finds that this application is bereft of merits and the same is accordingly dismissed,” the bench said in its judgment.

“In view of the above, I am of the opinion that the petitioner has not been able to make out a case for grant of bail. This petition is accordingly dismissed,” Justice Diengdoh said.

Dorphang was booked under the POCSO Act in 2017, for alleged sexual assault on a 14-year-old girl, who was rescued from a sex racket that has many people involved.

He was arrested from an inter-state bus terminus (ISBT) at Gorchuk, Guwahati in Assam after absconding for 11 days.

Two FIRs were filed by the State Commission for Protection of Child Rights (SCPCR) against him based on the statements made by the victim girl, who identified his photograph as one among the accused.

One FIR was lodged at Laitumkhrah police station and another in Ri Bhoi district.