Satyal Pal Malik has been appointed as the Governor of Meghalaya.

Bhagat Singh Koshyari, who is the Governor of Maharashtra, has been given the additional charge of Goa. 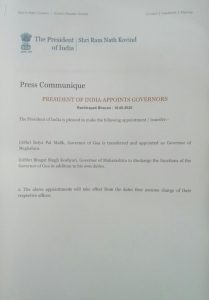 Malik was appointed as Goa Governor in October 2019.

He earlier served as the Governor of the erstwhile state of Jammu & Kashmir.

Malik was at the helm when Jammu & Kashmir was divested of its special status in August 2019 and split into two union territories.

Malik, who began his political career in 1965, was first elected to the Rajya Sabha as a Lok Dal member in 1980.

He was again elected to the Rajya Sabha as a Congress candidate in 1986.

Malik joined the Bharatiya Janata Party (BJP) and was elected as a Lok Sabha member in 2005.