Champion is the chairman of the organization, and Kingstone Marak is the joint secretary.

A statement issued to the media said that AHAM was formed on July 23, 2018.

“AHAM is created by the people, for the people and of the people for the welfare of A’chik jat within the territory of India. It is a non-political and non-profit organization but shall stand with firm dedication, determination, and commitment against political, social and economic injustices. AHAM has members from all walks of life and united joined hands together for genuine causes of A’chik jat within Meghalaya, and even outside, within Indian territory. We have issues and will tackle in the democratic principles,” the statement said.

Quoting Champion, the statement said, “People wanted me to lead the organization and offered me the president. This is huge burden and I accepted this great challenge and ready to shoulder the responsibilities for my A’chik jat (Garo people). The Supreme Court has set me free, I do respect at the time. I shall sacrifice my life and time for the A’chik jat.”

Champion deserted the Meghalaya Police when he was the Deputy Superintendent of Police and formed the militant outfit, Garo National Liberation Army (GNLA) in in 2009, one of the dreaded militant outfits in the State based in Garo Hills. 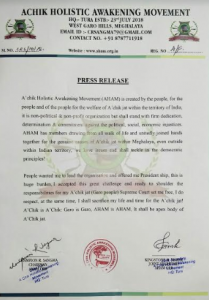 Champion has been the ‘chairman’ of GNLA and Sohan D Shira who was the ‘commander-in-chief’ was killed by security force on February 24 this year.

Champion was arrested on July 30, 2012, from the Umkrem-Pyrdiwah area on the Indo-Bangla border in East Khasi Hills district after authorities in Bangladesh handed him over to India.

Champion was released on bail from the Shillong district jail on March 24 this year, following an order passed by the Supreme Court.

Champion is facing various charges including attempt to wage war against the state under various sections of laws including the Unlawful Activities Prevention Act, Indian Penal Code, and Arms Act.