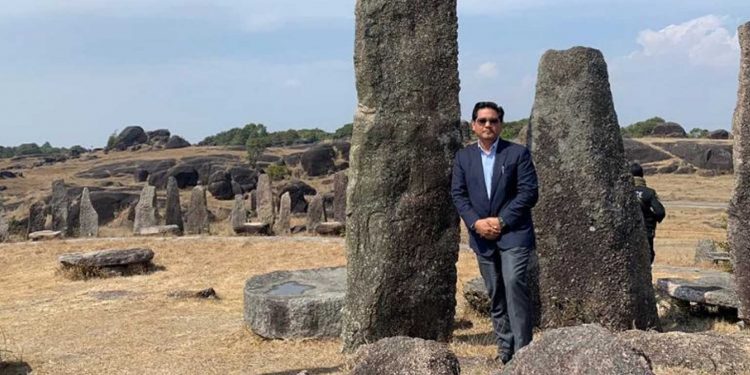 Meghalaya CM Conrad Sangma at the monoliths of Mawkyrduk

Meghalaya CM Conrad Sangma recently visited the monoliths of Mawkyrduk at the South Khasi Hills and expressed his desire to support and promote the site.

The heritage site, which is preserved by the Arts and Culture Department, has a striking resemblance with the Stonehenge of the United Kingdom.

“You will be surprised to see the similarity this place has with the Stonehenge of the United Kingdom, this place has a lot of heritage to it,” Sangma said in a video shared on his twitter.

At the #Monolith Heritage site in #Mawkyrduk, #Meghalaya. Our monoliths are similar to the #Stonehenge in the #UK and are very symbolic to our culture. It is our aim to preserve our rich heritage and promote this magnificent wonder of Meghalaya! @tourismgoi @MinOfCultureGoI pic.twitter.com/9IbDCzjECG

“This must be kept and developed, as a government we have decided to develop this area and promote this heritage site,” he added.

The project to protect the heritage site was taken up by the Arts and Culture Department in 2011-12 at an estimated cost of Rs 8 lakh, however, nothing much has been done as of now.