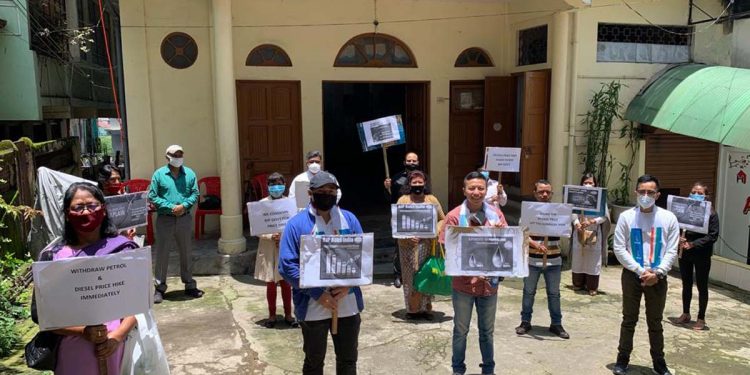 A view of the dharna staged in Shillong. Image credit - Northeast Now

The Meghalaya Congress on Monday staged dharna in the state as part of the party’s nationwide protest against the rise in petrol and diesel prices and excise duty.

The protest was participated by party functionaries from the Mahila, Youth, NSUI and Social Media committees of the Congress.

In his address, MPCC working president Lyngdoh wondered while in the international market the price of ‘crude’ has been declining every day, why the BJP-led NDA government at the Centre has been steadily increasing the petrol and diesel prices.

Condemning the NDA government, Lyngdoh said when the people of India have been suffering economically due to COVID19-induced lockdown, the Central government instead of extending help to them, is increasing petrol and diesel prices to earn

Later, a memorandum was submitted to the President of India through the deputy commissioner of East Khasi Hills, Shillong.

Lyngdoh informed that all the DCCs in Meghalya are observing the ‘dharna’ in front of their DCC offices and handing over similar memoranda to the respective deputy commissioners for forwarding the communication to the President of India.

Strictly adhering to the COVID19 protocol, all the Block Congress Committees would observe dharna between June 30 and July 4, he added.