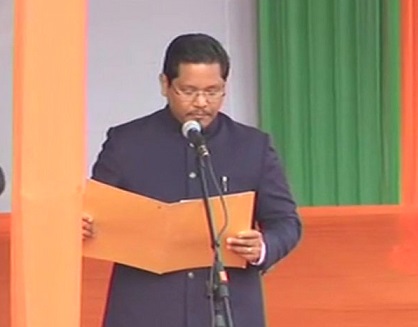 Meghalaya Chief Minister Conrad Sangma will face a floor test at a special session of the Assembly on Monday to prove his majority, officials said on Sunday.

Prior to Sangma proving his majority in the 60-member House, Protem Speaker Timothy Dalbot Shira will preside over the session to elect the Speaker of the newly constituted tenth Meghalaya Assembly.

Former Chief Minister Donkupar Roy of the ruling Meghalaya Democratic Alliance (MDA) government and opposition Congress legislator Winnerson D. Sangma are in the race to occupy the top post of the Assembly.

Roy, the longest serving legislator, is also the President of the United Democratic Party, which is the key partner in the National People’s Party-led government. Sangma is a two-time Congress legislator from Salmanpara constituency in the West Garo Hills.

Sangma was sworn in as the 12th Chief Minister of Meghalaya on March 6 after six non-Congress parties, include one Independent came together and formed the Meghalaya Democratic Alliance coalition government.

“The MDA is confident that its nominee Donkupar Roy will be elected as the Speaker of the Assembly and the Chief Minister will prove that he enjoys absolute majority in the Assembly,” Home Minister James Sangma said.

The NPP, which won 19 assembly seats in the just concluded polls, is the second largest party after the Congress with 21 seats.

Meghalaya is another state, after Manipur and Goa, where the Congress has not been able to forge a post-poll alliance with any of the regional parties despite emerging as the single-largest party.

“We are hoping against hope (Speaker’s election). There are a few friends at the other side and let us see tomorrow,” former Excise Minister and Congress Spokesperson, Zenith M. Sangma said.

Lone Khun Hyniewtrep National Awakening Movement legislator Adelbert Nongrum and two Independents, S.K. Sun and Lambor Malngiang, are yet to declare their support for any of the two candidates.

Polling for 59 of the state’s 60 assembly seats was held on February 27. The election to one seat was countermanded following the killing of a Nationalist Congress Party candidate Johnathone Sangma.