A view of HSPDP rally at Malki in Shillong on Tuesday.

The opposition Hill State People’s Democratic Party (HSPDP) vowed to fight against money power in the upcoming Assembly elections in Meghalaya. HSPDP assured of ensuring a ‘financially-sound’ government next year that worked for overall development of the state.

The HSPDP, an oldest regional political party in Meghalaya gave this assurance at the rally of thousands of its party workers at Madan Malki here on Tuesday.

Addressing the rally, HSPDP president, Ardent Miller Basaiawmoit said that the pre-poll alliance forged with the United Democratic Party would ensure that the next government would be led by the two regional parties.

He also lashed out at the ruling Congress for its alleged failures to create opportunities and ensure equal development in the state but helped only “few individuals” to amass wealth. 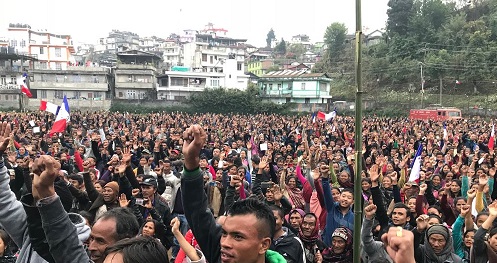 Basaiawmoit also listed a number of issues that his party would address when the party comes to power in 2018.

He also said that the HSPDP would push the Centre to include Meghalaya under the special provisions of Article 371 similar to Article 371A and Article 371G being accorded to Nagaland and Mizoram respectively.

Article 371 is a special provision which empowers the state to protect the customs, practices, land, administration of justice and others to ensure no acts of Parliament can interfere.

Stating that safeguarding the rights to ownership of the land and strengthening the existing Meghalaya Land Transfer Act is on agenda, the HSPDP said that the inclusion of Meghalaya under the special provisions of Article 371, would also pave way for finding solution to the ban on coal mining in the state being imposed by the National Green Tribunal, which has affected the economy of the state and livelihood of the people.

Promising clean and good governance, Basaiawmoit said that the HSPDP would ensure livelihood to the people through tourism, and create job opportunities for the youth of the state and imbibe among the citizens of importance of cleanliness.

Meanwhile, the HSPDP leader hit out the BJP alleging it of making all attempts to pursue the agendas of the RSS, and trying to implement laws that would no longer make India a country of unity in diversity.