Final voters’ turnout in Meghalaya stands at 84.86 per cent

Meghalaya Election Department on Wednesday released its final report on voters’ turnout stating that the final total percentage stood at a staggering 84.86 per cent.

Earlier, the last figure that the Election Department gave on Tuesday was 77.66 per cent.

However, these figures do not include the postal votes, Williamnagar and the Kyndong Tuber polling station in Raliang constituency.

Pooling at Williamnager was countermanded following the killing of Nationalist Congress Party (NCP) candidate Jonathone Sangma days before the election.

While polling at the Kyndong Tuber polling station in Raliang constituency was stopped on Tuesday owing to malfunctioning of the electronic voting machine (EVM). 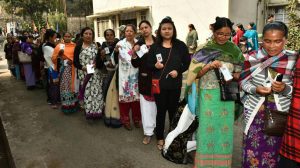 Repolling today: The re-polling at the Kyndong Tuber polling station in Raliang constituency has begun smoothly on Thursday morning when last reports came in.

Re-polling began at 7 am in the morning amid tight security.

The district magistrate has promulgated Section 144 CrPC to maintain law and order following reports from the district SP that a public meeting was being held where a diktat was issued to voters.

The district magistrate has also banned sale of liquor, use of loud speakers and mega phones, carrying of arms and gathering of more than five persons beyond 100 meters from the polling station.