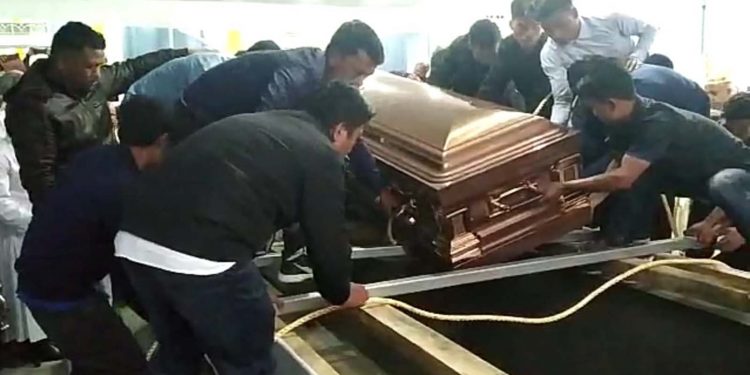 Archbishop Dominic Jala being laid to rest in a grave close to the Cathedral Church in SHillong on Wednesday. Image credit – Northeast Now

Archbishop Dominic Jala was laid to rest in Shillong on Wednesday evening.

Nearly one lakh people came to pray and bid adieu to Archbishop Jala.

The Catholic Church leader rendered his service as a priest for about 42 years including as the Archbishop of Shillong Archdiocese for decades.

The funeral was held two weeks after the Archbishop died in a car mishap at Colusa County, Oakland in California, USA on October 10 (Oct 11 as per Indian time).

Another priest from Kerala, Fr Mathew Vellankal, who served at St. Bonaventure, Concord in California, died along with the Archbishop.

The mishap took place after a Toyota Prius, they were travelling in, was hit by a tractor-trailer truck.

The mortal remains of the Archbishop reached Shillong from USA on October 20 after completing all formalities in California.

The funeral began with the celebration of the Holy Mass at the Cathedral Church of Mary Help of Christians, Laitumkhrah here at 1 pm.

Guwahati Archbishop and the president of the North East India Bishop Conference, Most Rev John Moolachira was the main celebrant in the presence of other 15 Archbishops and Bishops from the Northeast and other dioceses in India.

The funeral was also attended by hundreds of priests, sisters and brothers besides church leaders from other denominations and various dignitaries.

Priests from the Archdiocese of Oakland, USA also attended the Archbishop’s funeral.

This was perhaps one of the biggest funerals in Shillong after the funeral of Lt. Keishing Clifford Nongrum, an Indian Army officer from Shillong, who died during operations in the Kargil War on July 1, 1999.

The service continued for about four hours, amid emotional scenes, as people shed tears for having lost one of the tallest Church leaders and an intellectual.

He was also the face of the Catholic Church and Christians from the Northeast and the country.

People also had teary eyes when a condolence message from Pope Francis was read out, as well as when Diocesan administrator, Fr John Madur spoke.

Louise Jala, the brother of the Archbishop, delivered a speech during the service.

After the rituals, Archbishop Jala was laid to rest in a grave close to the Cathedral Church.

The grave will be covered late at night as scores of people continued tossing soil on the coffin inside the grave as a mark of paying their last tribute to the Archbishop.

He was ordained priest from the congregation of the Salesians of Don Bosco (SDB) on November 19, 1977.

On December 22, 1999, Jala was entrusted by Pope John Paul-II to shepherd the Shillong Archdiocese, and subsequently ordained as Bishop on April 2, 2000.