30,000 citizens of the state will get an opportunity skill themselves under ‘Samarth’ scheme 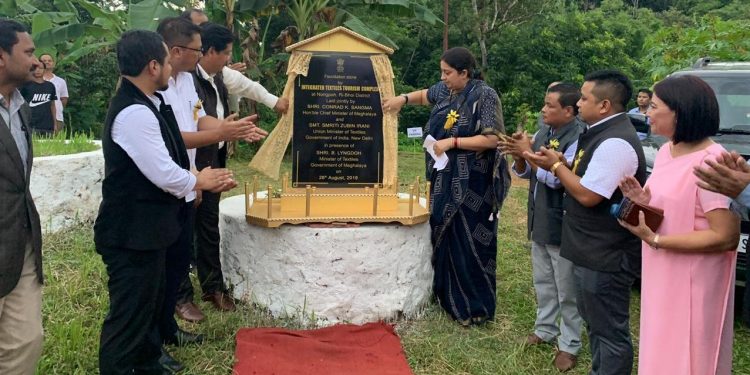 Union minister Smriti Irani on Monday said that the Central government was committed to supplement the endeavours of the Meghalaya government for development in the textiles and women and child development segments.

Irani, who holds the charge of textiles as well as women and child development ministries, was in the Meghalaya to lay the foundation stone of the Integrated Textiles Tourism Complex at Nongpoh in Ri Bhoi district.

Irani said the complex and activities therein have been funded by the Central government so that the art of Meghalaya prospers.

She said that as many as 30,000 citizens of the state will get an opportunity skill themselves under ‘Samarth’ scheme.

Following chief minister Conrad Sangma’s request, the Centre has enhanced the number of beneficiaries from 7,200 to 30,000 under the flagship.

Under the scheme, youths of the state will be skilled in apparel & garmenting, textiles and handloom sectors.

The minister also interacted with the children and Anganwadi workers at the Umdihar-1 in Ri Bhoi district.

The minister during her visit acknowledged the beautiful landscape where the NIFT campus is coming up.

The Institute is likely to be inaugurated by November this year. The progress of construction of the campus has reached 98.95 per cent.

The campus spreads over a sprawling area of approximately 20.13 acres provided by the state Government.

The institute site is located at Mawdiangdiang about 7.4 kms from Shillong. The construction of the institute was started in 2013.